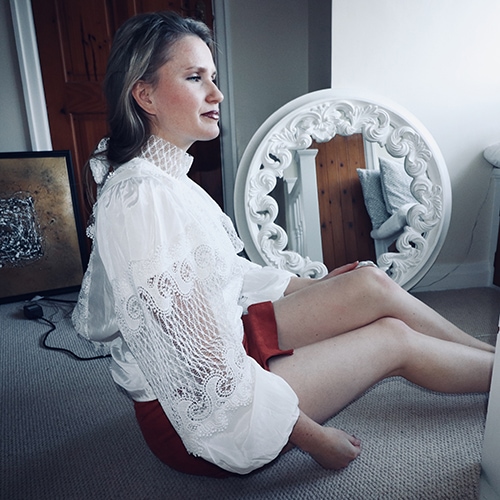 Karin Fransson, a “sultry Swedish-born pop starlet” born in Göteborg but grown up on a small island in the middle of Sweden where she roamed freely during her formative years. A well-turned-out first-class singer-songwriter and creative artiste who blends together jazz, folk, soul and pop into her variety of compositions.

Now not only a seasoned London performer with gig experience in both France and Scandinavia but an experienced songwriter and recording artist with three self-published releases under her belt with the debut album “Private Behaviour” (2011), double single “Silver Lining” (2015) and current new EP “Commuter Diaries, Vol.1” out March 2020.

Rough Trade called the album “a stunning ‘popness’ all of its own. very good indeed.” upon the debut release whereas her local Swedish newspaper JP dubbed her “Silver Lining” a departure from this sound with the new electronic and more produced sound. The EP Commuter Diaries Vol.1 (2020) however sees her return to a more organic sound with acoustic instruments
and a certain live feel for the 4 new tracks.

Miss Fransson’s musical journey actually started with learning to play the viola as a child and then teaching herself to play the guitar to accompany herself singing. It was in her latter teens during a brief stay in Hartford, Connecticut in the US, that Fransson had her first recording experience much to her delight.

She reflects on this as an interesting time as she was then job shadowing Dianne Mower, a local renowned Jazz singer/tutor, who was in the early crusade to bring back to the stage “The Real Ambassadors” – a musical written by Dave Brubeck with her school choir at a magnet school. This experience further inspired young Fransson’s inclination towards jazz adding to her growing list of inspiring Jazz singers, which firmly featured Ella Fitzgerald, Sarah Vaughan, Aretha Franklin, Rigmor Gustafsson already, now also Carmen McRae and Jon Hendricks. Whilst the immense control and tone of the jazz singers inspired Fransson, the early diet of folk, rock and pop from greats like Bob Dylan, Neil Young to Abba and Destiny’s Child dipped in traditional Swedish string ensemble music and classical masterpieces, certainly never left the yet to bud songwriter in Miss Fransson.

Shortly after the US adventure, a relocation followed and now to London to complete an HND course in Vocal Performance and Production in Contemporary Music at the LCCM.

This is where she started to make a name for herself in subsequent years playing live extensively and becoming a sought after writing and recording artist for Sony/BMG as
well as for artists directly.

“Darling”, “Sister Soul”, “Shallow Waters” and “Slowly” are currently receiving the early reviews off the new EP “Commuter Diaries, Vol. 1” which is doing the rounds with praise so far;

“Darling also touched us with her arrangements and the voice which is exceptional on this track. This title is what you could call a kind of soundtrack, but the mini film which serves as a clip cuts the imagination and gives way to a form of brief narration. It corresponds to this lost moment that we only live in times of contemplation.” Julien James Vachon, Direct-Actu Blog

“I am not quite sure what genre to call Karin Fransson’s music, but it definitely stands out in a crowded overall music scene. Fransson’s vocal alone makes it really interesting. There’s a dash of another Karen in her sound, that is Carpenter. The pure quality just drips from each vocal line.” Greg Jones, Eartothegroundmusic Blog

“The Jazzy vibe of Slowly is a great start. If you don’t know Karin Fransson yet, this title could rock you into the addiction of the Jazzy vibe and piano bars.” Julien James Vachon, Direct-Actu Blog