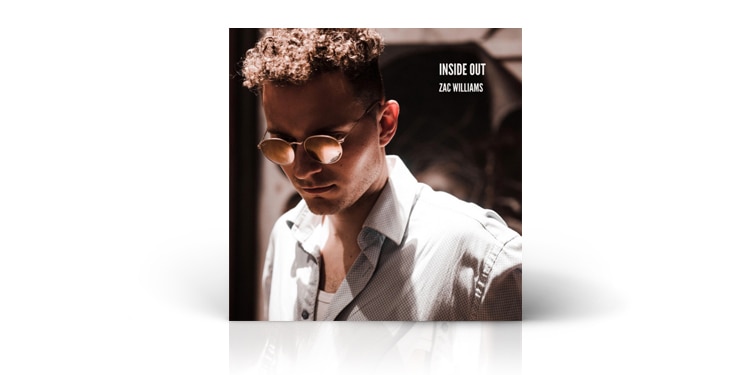 I’m not too fond of coriander.

Note: *I’m sure this is the first-ever album review to open with this line. Yes, it’s relevant! Read on.

Even if I don’t know what all the ingredients in a dish, it just doesn’t taste right if there’s coriander in it.

In comparison, something about Danish artist Zac Williams previous releases had the equivalent of coriander in them. His R&B sound had all the right ingredients however an element disturbed the overall flavour.

For me, Zac’s new album Inside Out has got everything right. Not a hint of coriander!

The 12-track album minimalizes the arrangement and reveals a sensitive acoustic collection.

Zac Williams has an unbridled love and affection for R&B’s rich history and the songs feel retro-tinged. Scandinavia males who sing R&B are still a rarity as exposed harmonies of raw, emotions are not typical, Nordic traits. Zac harnesses his personal expressions through a series of ballads and love-hurt lyrics and convinces his intentions are heartfelt and real.

In essence, the album is a duet connecting Zac and an elegant guitar. Whether playing Latin, blues or R&B inspired chords, the guitar distinguishes each track delightfully. When a subtle and warm harmonica or soft piano keys join, they appear like special guests.

Music detectives do not have to look for clues of his primary influence as Stevie Wonders fingerprints are all over this, especially Counting The Hours.

The essential tracks are Patience, Available and Counting The Hours.

If I have any complaint about the album, it’s just a little too long. Well, with Covid still raging it doesn’t look like we’ll be going anywhere soon. So, light the candles and get ready for some romantic, tasty stuff.

Zac Williams - Inside Out

The album works hard to be loved, and Zac convinces his intentions are real and heartfelt. So, light the candles and get ready for some romantic, tasty stuff.