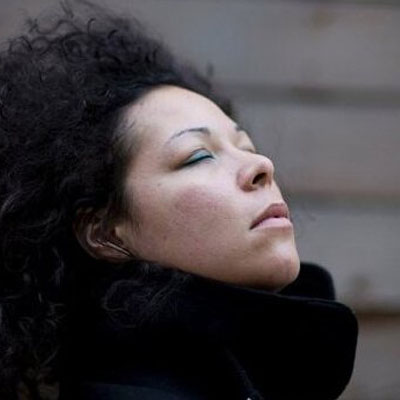 CURRENTLY OUT OF THE STUDIO

Kinny – aka Canadian born, Norway based Caitlin Simpson – is one of a handful of standout female singers to have been nurtured and developed in the Tru Thoughts stable.

Kinny’s captivating power and range of vocal expression, her diverse cultural heritage (a mix of Jamaican, Native Canadian and Swedish), and the twists and turns her life has taken all feed into the music. This is a richly emotive sound that never shies away from a dancefloor-filling groove or a stream-of-consciousness lyrical flow.

Her 2010 solo debut – on which production was split between collaborators including label-mates Quantic, Nostalgia 77 and Hint – gained rave reviews and support from Laurent Garnier, Craig Charles (BBC 6 Music), Mark Lamarr (BBC Radio 2) and Daddy G (Massive Attack), and sparked more than the occasional comparison to luminaries including Erykah Badu.

This time, on ‘Can’t Kill A Dame With Soul‘ she worked exclusively with Souldrop, fellow residents of the vibrant musical town of Bergen, Norway. Creating music in one room with her production team, rather than across several international borders, made for a totally different recording experience. “We felt more like a unit creating something and fed off of each other’s energies”, she says.

Kinny’s last two difficult years have in fact also been a busy and rich creative period. As well as making this album, she has also recorded featured parts on a handful of De La Soul songs, supported Ugly Duckling on tour, and played many other well-received live PAs including Bestival. Having now assembled and rehearsed a new live band, this powerful and much-praised performer is looking forward to taking to the road and touring the album in 2012.