You could easily be confused by the headline or think it’s a typo for which I am often guilty. Perhaps, I should have written – A Brand New Stage released their debut album, A Brand New Stage, but you can see, neither really works well.

I’m pleased to say the album’s rather uninspiring self-title is the only real major misstep on this 11-track soul-filled album.

Erik ‘The Furniture’ Pettersson is the man behind New Voices, which invites unestablished singers to perform and helps them reach a wider audience. This collective is called ‘A Brand New Stage’. The concept also explains the CD cover artwork, which shows a highlighted solitary 50’s style microphone.

As the proud owner of a nicely presented CD review copy, whilst listening, I also flicked through the pages of lyrical booklet enclosed. Each song is presented with Erik’s own presentation of his influences during creating each song. It’s a nice touch and adds that extra dimension, missing from the cascading music waterfall we call ‘streaming’. 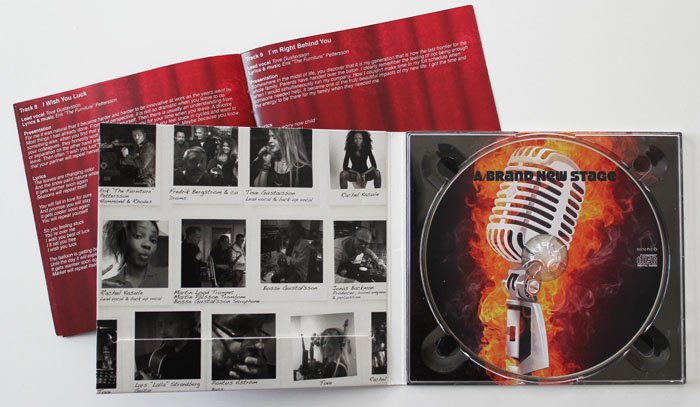 This soulful album features the introduction of singers Tove Gustavsson and Rachel Kasule. Both singers appear alternatively through the 11 track album.

Expressive soulful vocals and a tight production set the tone as Rachel opens the album with the previously released single and video, ‘Feel the Rain’.

Tove Gustavrsson then takes centre stage on track two: Checking out. Track 4, also sung by Tove, is one of my faves, ‘Who’s Afraid of the Dark’ with its catchy chorus.

For a duo of debut voices, it’s excellently sung, highly constructed, and a well-written album, even if some lyrics are a little suspect, at times. Regardless, Tove and Rachel prove they both have what it takes to step in to the spotlight.

Overall, the album lacks a little edge or a deep punchy production; however, there’s nothing really not to like, and you won’t regret giving this album a spin on any day or evening.

Listen on spotify and itunes or purchase a CD online.

Overall, the album lacks a little edge or a deep punchy production; however, there’s nothing really not to like, and you won’t regret giving this album a spin on any day or evening.