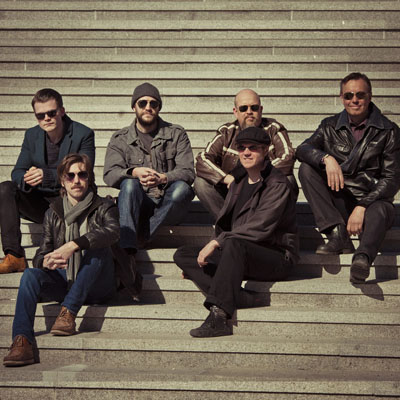 Ever since initiating the band in 2007, jazz pianist, composer, arranger and producer Daniel Lantz is the man behind Beat Funktion’s musical approach and powerhouse sound, having equipped the band with the elite among Swedish jazz soloists, such as trumpetist Karl Olandersson, sax player Olle Thunström, guitarist Johan Öijen, bassist Pal Johnson and drum prodigy Jon Eriksson. Percussionists join the band on occasion.

Their way of musically combining outstanding jazz improvisation with a variety of commercial genres as funk, rock, pop, disco and reggae has enabled their music to reach out to a broad range of listeners across different genres. After their debut-album The Plunge (2010) had received praise worldwide with agents and reviewers of jazz, funk, soul and DJs, their 2nd album Moon Town (2013) was met with considerable enthusiasm and rave reviews in the US as it stayed among the top 10 on the US jazz radio charts for no less than 15 weeks in the summer of 2013. It even charted on the Canadian charts among the Top 5 and made it briefly into the US rock charts and traditional JazzWeek charts. At the same time, Beat Funktion’s third album, Voodooland was commissioned by legendary Japanese funk-label P-Vine, a limited edition that has rapidly acquired a cult status among Japanese DJs and groove collectors. This funky collector’s item had its highly anticipated release in the US in the spring of 2014, where it knocked out all competition from major labels and artists on the US jazz charts; not only did it linger on the charts for 16 impressive weeks, but also rocketed to #1 for three consecutive weeks above major labels and artists, and stayed among the top ten on the Canadian charts for eight weeks.

Following the success story of Voodooland, the band’s fourth album, Mandy’s Secret, saw its global release in late September of 2014, timed to coincide with the band’s first US tour. Ten fresh compositions penned by Daniel Lantz combined with high production values in the hands of co-producer Mats Björke, a pianist from famed rock band Mando Diao, made this riveting album one of the band’s best. It peaked at #3 on the US charts and #1 on the Canadian charts, lingering for a total of 21 consecutive weeks, and was accompanied by the release of 5 official music videos, as well as the release of Live At Fasching, Beat Funktion’s first full live concert on film, released on YouTube in the spring of 2015.

Beat Funktion’s November tour in 2014 of the US had the band play at the legendary fusion venue The Baked Potato in Los Angeles, and a Las Vegas session led to the affiliation with famed rapper Damon Elliott, son of Dionne Warwick and producer of global stars like Beyoncé, Pink and Gwen Stefani, who in turn became a featured guest on their fifth album, Olympus, released in June 2015. Another collaboration with producer Mats Björke, the album is the first time the band features sung vocals by guest performers, and in addition to Damon Elliott (the song “King Minos”), it showcases South African soul singer Sani Gamedze (on the song “It’s About Time”) and Swedish pop singer Rebecca Laakso (on “Where’s The Sunshine?”), thereby expanding across the genre boundaries. Olympus is the band’s most elaborate concept album so far, its music-themed entirely on legends and characters of Greek mythology. Like Mandy’s Secret, it peaked at #1 on the Canadian charts and at #2 on the US charts, remaining in the Top 40 for 16 weeks in the summer of 2015, becoming the 12th most played album on the CMJ jazz charts for 2015. Beat Funktion and Olympus was further nominated at the Scandinavian Soul Music Awards 2016 in four categories: Best Album, Best Band, Best Producer (Daniel Lantz & Mats Björke) and Best Newcomer.

The band’s sixth album, titled Green Man, had a Swedish release in September of 2016 and an international and US and Canada release on January 2017. It is the band’s most ‘vocal’ album to date, featuring no less than eight guest vocalists: Swedish/Russian jazz star Viktoria Tolstoy, American jazz phenomenon Alicia Olatuja, rapper Damon Elliott (returning from Olympus), Swedish/Iranian pop diva Jasmine Kara, Swedish hip-hop/soul queen Adée, Swedish Idol 2014 contestant Matilda Gratte, Swedish jazz and blues legend Claes Janson and African world/fusion performer Deodato Siquir. The release was met with critical and popular acclaim outside of the band’s regular jazz-funk audience and was accompanied by the publication of 7 live concert videos and 3 official music videos, as well as the band’s first-ever digital-only release of three singles, Maja, Hayweather and Rio, songs that could not fit into the Green Man album. In connection with the launch, every guest artist was given a personal portrait and interview in the 9-episode documentary called Exploring Green Man, available worldwide on YouTube. As part of the release tour, Beat Funktion was invited back to the popular live radio show P4 Musikplats Stockholm together with guests Viktoria Tolstoy and Matilda Gratte and also performed at the prestigious Stockholm Jazz Festival, the Hijazz Music Festival and renowned venue Katalin And All That Jazz.

In the spring of 2018, Beat Funktion toured again after a one-year hiatus, performing with singers Rebecca Laakso and EllyEve as well as Austrian singer Natascha Flamisch on a Germany tour. The band is currently set to release their 7th album, titled Roots, in November 2019, which is an all-instrumental live studio project, and their 4th collaboration with co-producer Mats Björke.