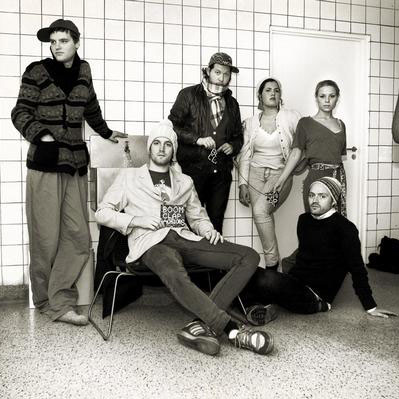 NO LONGER TOGETHER IN THE STUDIO

Boom Clap Bachelors spans over everything from electroclash, broken beat over disco to futuristic hip hop and soul.

There is a love a mixture of genres, which creates a dynamic musical universe. Boom Clap Bachelors is a collective of live artists, producers and DJs from Copenhagen. The music is being composed and produced by a demo is sent out in the collective – each member then builds more on the music and passes it on. No one really knows how many times the demo gets past on but their first album “Kort Før Dine Læber” was released January 28th 2008.

What distinguishes Boom Clap Bachelors besides the process of composing and producing are the off-beat drum programmings and the unschooled way of playing instruments. The result is both electronic, poetic and futuristic with an international sound though Danish lyrics. Combined with singer/songwriting, electronica, soul and hip hop inspired beats.

Boom Clap Bachelors is one of the most recent signed bands on Music for Dreams.