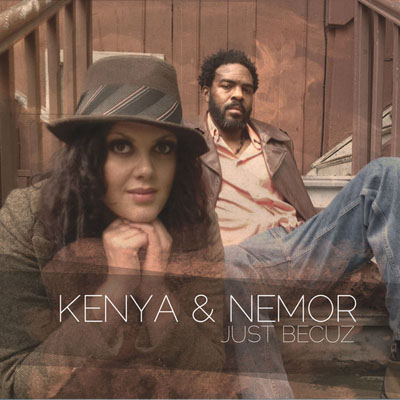 A smooth and sensuous sound of their own influenced by the likes of Marvin Gaye, Earth Wind & Fire, Atlantic Starr, Sade Jill Scott and Maxwell just to name a few and you have Kenya and Nemor.

If the midnight sun had a voice, it would touch that inner chord that transforms simple tones into something so much greater. That is the vocal calibre of Icelandic-American Kenya Emil, lead singer of the duet Kenya and Nemor, who are gearing up to bring their music to audiences all over the world. Behind Kenya shines a radiant Southern moon that shrouds her softly sung melody with the perfect texture to make the sensation complete. It is Jay Nemor, an American-Icelandic (originally from Texas) songwriter deeply connected to the very roots of soul music. When they perform, the audience asks itself: “Why don’t they make music like that anymore?” Well, they do and it manifests itself in this duo.

Kenya and Nemor began in mid-August 2006 when they gave their first full band performance at the University of Iceland student bar. From that, they went directly to centre stage on Reykjavik Culture Night where they enthralled Icelanders with their magic. Finding the audience very receptive to their sound and music, they continued to perform at Iceland Airwaves, Reykjavik, Crash Mansion, New York City, Sildajazz, Haugesund, Jamfestivalen Norevikane, Sognefjord, Reisefestivalen in Oslo, and were asked to make an appearance at the Christian Radich suite Grand Hotel Oslo at the 25th Anniversary of the American Coordinating Council of Norway’s annual 4th of July Weekend Celebration.

Today, they are stepping up their act with high calibre musicians from all corners of the world and ready to take their act to the finish line.