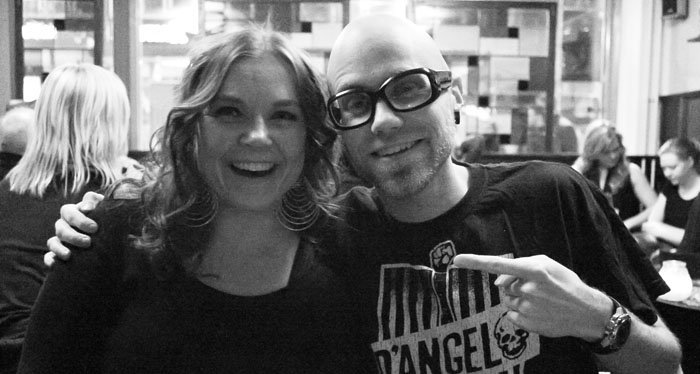 Humus – A desire for soul

A couple kisses, slowly, longingly, and passionately. The camera remains fixed, focused on the pair as their mouths explore one another and their hands gently stroke and caress their bare skin.

This was exactly how we first discovered the Finnish duo group Humus (Heikki/Tiia) in 2013 with the sensual video which features lead singer Tiia and her real-life partner in a soulful version of the ‘Whole Lotta Love’ classic, originally sang by Led Zeppelin.

The steamy video is also the creation of Heikki, who also created and directed the latest videos to their songs ‘I do (I do)’ and ‘I’m Telling You’. Each creative video release has drawn our attention as Humus continually push themselves visually and musically, and we definitely couldn’t visit Finland without meeting them. Sporting a cool pair of glasses, Heikki now sits in front of us in a bar in Helsinki, next to the delightful Tiia.

Hi guys, we’re really excited by the sound of everything we hear coming out of Finland right now. Can you describe how it all started (the soul movement in Finland)?

Heikki: First we got this hip-hop thing in Finland, which started around the year 2000. I was actually in the movement at the time. It was the first thing and everyone started listening to hip hop. But then you understand the funky parts, and you eventually come back to soul and where it all started. Then Quintessence was the one band who released something new and became a big influence to so many people. All the youngsters playing at semifinal (Oaklyn, Dolla Lova, The Man) have been fans of Tuomo. The drummer of Dolla Lova is also Tuomo’s drummer, so now there are these two generations coming together as one.

We know Heini (lead singer from Dolla Lova) is Tuomo’s cousin too! Amazing! Ben Rogers is also a member of The Man and is helping influence things right?

Heikki: I’ve known Ben for years now, he’s 10 years younger than me. I started to feed him with D’Angelo and Raphael Saadiq and similar stuff, so he quickly got into that genre. He wanted to learn how to play the guitar properly, so he began studying at ‘Helsinki pop & jazz conservatory’. Whilst there, Ben met all of the other people; including Oaklyn, Dolla Lova and The Man, who were all from the same class, where Tiia works as a teacher. We’re the only ones who don’t fit in the game since we’re a little older.

The whole connection is that I know Ben, and we’ve had this idea of the soul thing since Ben was together with Humus – we started that together. Then Ben wanted to make his own sound, which signalled the start of The Man, as well as some work with Dolla Lova & Oaklyn too. 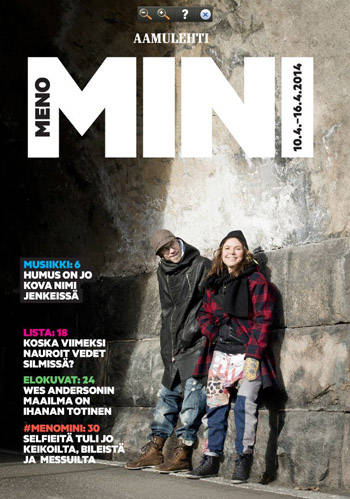 But Humus is clearly part of Finland’s new soul sound, so Tiia, how did you guys meet?

Tiia: We used to date. Actually, I didn’t know much about soul music before I met Heikki. So I guess you could say Heikki has also taught me everything about this type of music. I’m a professional teacher in music and I bring to Humus something a little different, since I know much about music theories, creating the notes, note sheets, and that kind of things. Heikki is a professional in another way.

Heikki: The first time we actually met was at the Eurovision song contest (Finland) and we were both competing against each other, and that was like five years ago (2009). I was there with my former hip hop band. So, we met there and ended up in a relationship together. When we started to make music we got on each other’s nerves a lot, and ended the whole relationship. Now, we’re not in a relationship anymore, but we keep on doing music.

Tiia: What was left of it was the best of it (we all laughed!). Making the music.

Heikki: I’ve always wanted to make soul music, since I heard the first D’Angelo album Brown Sugar and Toni, Toni, Tone… you know, the classics. I wanted to make this, but I can’t sing very well. Well, I can sing, but not good enough. I’ve searched for years for someone who I could do this with. So when we met, I wanted to try out soul music, as it has been a fantasy of mine for years.

Tiia: I made Finnish pop music when we met and learned the soul, the rhythm, the sound, and the style over- five years. It has been like a school of soul for me doing this.

Do you think this ‘education’ within soul has changed your perspective of music?

Heikki: I want to hear the answer to this too.

Especially this neo-soul has affected me so much, as I also teach and sing jazz too. I like jazz a lot. In this experience I’ve learned so much; the rhythm and how you can be “on” the rhythm or a little “behind” the rhythm and somehow still be in the rhythm – the intricacies really are astounding. And that is quite difficult, especially for a girl who was once a pop singer. Heikki has definitely influenced me a lot. I think it was during our first or second day that he presented me with a big pile of CD’s and the first one was actually D’Angelo.

So Tiia, this was the first time you had heard this music?

Tiia: No, of course, I’d heard it before, but I hadn’t been that interested in it back then, because at first, I thought it was kinda boring. Nothing happened for me. However, now I think totally different. And that’s very good, that’s called good progress!

When you say that you felt it was boring and that nothing happened, would you say that maybe Finland feels the same way?

Tiia: Yes, definitely! I also think that the radio-channels don’t give enough opportunity for this kind of music to be heard. There are only small radio stations that play this type of music regularly, and unfortunately, not many people are listening to those stations. It’s mainly underground people who like this music and this ‘lifestyle’. It’s definitely about the lifestyle.

How would you best describe soul music as a lifestyle? How is this lifestyle reflected in your way of living?

Tiia: It’s reflected in how I dress. How I look is even different. Well, it’s a soul thing, it has got soul! So for me, it has brought more soul and that’s why I think it’s a lifestyle. And I appreciate it and I’m very proud of it.

Would you describe yourself as being the starting point of something new in Finland?

Heikki: To be honest, we should work together. The four of us (Oaklyn, Dolla Lova, The Man), all of the minority music scene in Finland… first, they are competing against each other and they are all killing each other. It’s stupid. And now, what we need to do is combine our forces. I hope that we’re going to start something special.

The funny thing is the hipster/cool people in Helsinki and Finland when you say Erykah Badu they say “yeah I love Erykah Badu”. When you go and give them Oaklyn, which sounds a lot like Erykah Badu, they’re like “I’m not interested in this shit, what is this?”.

And the festivals, like FLOW, they don’t do enough to support the local artists. They take the big artists like Erykah Badu, but none of the small local bands are there to promote themselves. So people should understand that it is the same music, and the situation is not better in the States or anywhere else. And the truth is, when we get into the future of soul, I have to tell you how I feel.

The Americans think “hey we’re Americans, we’ve created the whole music and we’re the best in the whole scene”. There are a couple of really talented musicians in America, but that’s about it. They haven’t reinvented the wheel, it’s still the same.

I think if we just keep on doing the stuff we’re already doing and are continually getting better, and at the same time supporting each other, we’re going to be really good.