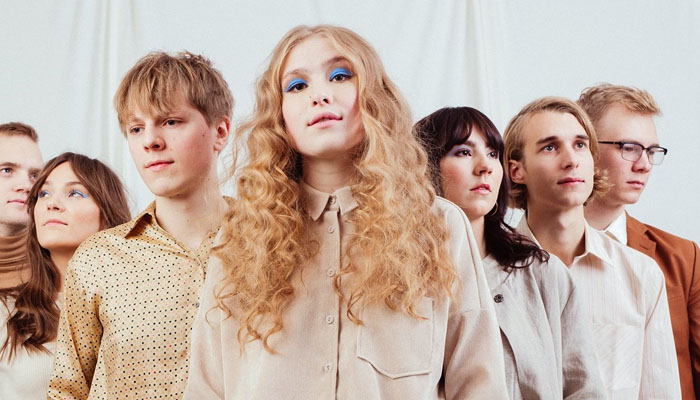 On October 8th 2019 Norwegian band Fieh performed at Bar Brooklyn in Stockholm. But before that, Amandus Kraftling got an exclusive interview with lead singer Sofie Tollefsbøl! Held in native languages Swedish and Norwegian, a recurring expression by Sofie was “fett” and “drittfett”. Taken literally, meaning “fat” and “shit fat” – loosely translated into “wicked” and “bloody wicked”.

So how do you feel about tonight?

I feel good! I’m here in Sweden for the second time only, ever. It’s my first time in Stockholm too, so I’m enjoying getting to know the city!

So, where did you perform the first time?

We performed at “Where’s the Music” in Norrköping. A really nice gig with lots of people!

How much have you been touring otherwise? When did you first begin?

Hmm, not sure I can call it touring! We started around 2014, but we weren’t playing that much then. Last year’s summer was probably when we started playing, you know, a lot! Lots of festivals in Norway.

Am I right to assume that you are, by now, a bit chased and requested to play?

Well… I hope so haha! From Sweden and such, I find it hard to tell though…

You mean difficult to predict? How many will show up or not?

Yeah, I mean even home in Norway it’s hard to tell how many people will show up for a gig. Once there were around 150 people at our gig, for all I knew they could’ve been 5! I mean yeah, you can tell how many people are listening to you on Spotify and from where. But still, from Stockholm? No idea haha!

That brings me into my next question: Do you feel that you have a well-defined target group, and from where do you think you’re heard most?

Well, it’s almost a bit strange, it seems as if many Norwegian elderly men seem to dig our music. They like the music they already know and can recognize it in what we do. But we also seem to have a fanbase among youngsters in South Korea. And I think that might prove that we have both these components of old ’60s and ’70s and some more fresh music like hip hop and soul/RnB. So really, it doesn’t feel like we have one target group.

That’s also difficult to say. Mostly, we hear from our fans what they think we sound like, based on what they already know. So, our elderly fans tell us we sound like Steely Dan, whereas our younger fans might say that we sound like Erykah Badu.

Speaking of your retro sound, based partly on your focus on live music – Do you ever feel the need to lean towards more mainstream pop? Is it hard not to end up in that position?

I think that totally depends on what the goal is. To transfer towards the mainstream for success, I don’t think that’s ever been an option for us. But that doesn’t prevent us from incorporating the sounds of different popular music styles. Say, for instance, Kendrick Lamar, who is highly popular. We’d have no problem taking influence from some elements of his if we like it.

What then would you rather say is the goal – if you have one?

Just playing and jamming! That’s not to say that it’s not wicked if people appreciate our jam. If you notice people showing up for your show, and digging it, that’s amazing. And digging a live performance – that just might be life itself for some. I know it can be for me. And if we can contribute to that, well then that’s insane!

In your bio, you’ve made clear that Fieh started out with you being inspired by Billie Holiday and Ella Fitzgerald as well as D’Angelo and Erykah Badu. But you also wanted to find your own sound, rather than copying theirs. How did you manage to do this?

That’s a good question… I think we’ve just tried out many different things. Talking about the elements we want to fuse. We all have somewhat of a similar taste, so we can all agree on what we find wicked. And since we fuse these older styles with modern ones, it’s easy to keep finding new things. With the process, it feels kind of natural. But not coincidental. Since we just want to fuse what we think is wicked, including these new modern elements.

A keyword is wicked (fett) then? That it’s got to be wicked?

Yeah definitely! That’s the only way to see progress really if it’s wicked or not. And just copying someone else’s sound, well that’s just not that wicked right?

Well, of course, we at Scandinavian Soul can agree on that!

What we also like to talk about is a growing scene of soulful music in Scandinavia and the Nordics. We like to emphasise it, but we can also clearly see that that’s what’s happening. A type of movement, which differs from what already exists domestically and globally. Can you see this pattern?

Yeah, a bit perhaps. It’s strange because where I’m from, Gjøvik, they did a lot of soul back in the ’70s. So, it’s not like soul is a new phenomenon. But this newer type of soul, influenced by hip hop and RnB, I think Sweden is first ahead in Scandinavia. You’ve had guys like Salem Al-Fakir for quite a while, whereas domestic Norwegian soul hasn’t been a thing for as long. Except for of course Bernhoft, who’s been doing his thing for some years now!

Would you agree to say that you’re contributing to this scene now, and maybe even taking over the token?

Haha, you’re a bit modest perhaps. We would definitely say that you are!

Well yeah, I suppose we do contribute. Since there aren’t a bunch of people doing this, we might be in the frontline of the scene.

We were previously talking about your creative process, and how it’s almost made by itself. And you stress the significance of community and fellowship in your music collective. For you as a singer and songwriter, do you think it’d be as easy or even easier to do this on your own? Or rather the contrary, that perhaps everyone needs this type of fellowship?

In other words, it wouldn’t have been as wicked!

When I told a friend of mine what my plans were for today, a bit casually I said “I’m gonna see and interview a Norwegian neo-soul music collective”. The reaction I got was not as casual, rather surprise really. I didn’t think of how niched that must’ve sounded… As a niched music collective, do you think it was through social media or local fans that you got the confirmation that you were on the right path?

Oh wow… I think it was when we had our first live performance. We were more than three in the band at the beginning, but only three of the original members are still present. From that moment forth we’ve felt appreciation from the audience. A confirmation that it was dope. I think that appreciation is what has kept us going! And again, I have to say it really means something to have social media and see your thing being appreciated by people in South Korea and Japan, that’s bloody wicked!

If we dig deeper into that. How do you notice there and then on stage that the audience felt your sound?

Well, people have very different ways of showing it depending on the person, of course. But some are very clear, in the way they move and dance – that’s the most wicked of all!

So that seems like some very lovely moments! Do you think it’s possible to pick one favourite moment with Fieh?

So hard to choose! Not to say I don’t like small, intimate places. Because the mood can be bloody wicked, like a mega kick. But then you have these moments in front of a big crowd, I’m thinking especially of Øyafestivalen when we got to play before rapper Stefflon Don. We were told about it only 24 hours before that, so on quite short notice. Probably the biggest stage we’ve ever been.

Oh, and um… I’m not sure I’m allowed to say this… Oh, it’s alright! And then there’s the moment when we were in Electric Lady Studio in New York, founded by Jimi Hendrix. And we were there with Russell Elvado, engineer and producer for D’Angelo (Voodoo and Black Massiah) among others. And that was insanely huge.

Speaking of these unexpected moments. When you were first signed. Was it Decca Records who found you, or the other way around? Was it hard to choose?

They came to us, I’d say. It wasn’t that difficult to choose. I think we felt that was probably the right thing for us.

What would you say has been the weirdest moment in Fieh?

Oh hmm… [Sofie looks over to the bass player of the band]. Andreas! What’s one of the weirdest moments we’ve been through? [After some time of thinking Andreas comes up with one]
Oh right, yeah that’s was quite a strange moment actually! It was at this festival home in Gjøvik. While we’re playing, I saw guitarist Jørgen just taking off his guitar and walking off stage. I thought perhaps he was sick or something. And so we played on, we couldn’t really interrupt our performance in the middle of it. But after the show, I was told that his amplifier had stopped working. But he had another one in his car. Which was parked a few blocks away! So what Jørgen did is he ran to the car, drove it back and came back on stage with the amplifier. So, he ran and drove during the show! I’d say that was rather strange! Very actionable really!

How much do you as band members hang around in private?

Well, in times like these, when we play like five gigs in a row, then we hang a lot! But we also have two couples within the band. So, they hang quite a lot, haha!

Have you ever noticed any groupies or inappropriate audience?

Well, Andreas had quite a huge fan club when we played in Lillehammer. A lot of screaming all over the halls. But they were probably just friends of his haha!

Final question: Do you see yourselves wanting to work with any of your influences, and if so who?

Well, Kendrick Lamar or André 3000 are welcome to lay a few lines over our beats! But in general, I just love working with other like-minded musicians with similar goals!

Well, obviously there can be a lot of potential in musicians with something new to bring to the scene! Not least Fieh. Thank you so much for this interview Sofie! I’m looking forward to hearing and seeing you live tonight!