As I prepared our interview I struggled to find a huge amount of information about him online, though having been part of the Scandinavian Soul scene for a while I’ve understood most musicians know his name. For many artists, he is held in high admiration, and his name is mentioned as a pioneer in Swedish soul music. 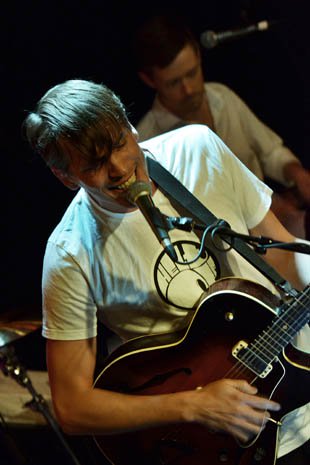 We meet backstage at Fasching in the middle of his rehearsal. Tingsek introduces himself by telling me that his first name is Magnus and that his artist name Tingsek was made up by his grandfather. Tonight’s show, at Sweden’s most prestigious venue for soul & jazz, was sold out in a week and he seems super excited!

Tingsek is a vinyl collector but loves to buy his music in all formats. Like most of us though he finds carrying and listening to music digitally everywhere, great.

“In the future, I’ll press everything I do on vinyl.

I didn’t before because I couldn’t really afford it, now there are more places to do it.”

I am too a big fan of vinyl, proud of my tiny growing collection. I ask him why he wants to make vinyls, “Well for one reason, for myself. To have my own music on vinyl is just something I’ve been dreaming about since I was a little kid. Then it just sounds better, if you’re a hi-fi nerd it shows you a big difference”.

Emily has just released her second album ‘The Switch’. Tingsek adds, “Emily’s album is one of the best this year” and also says he sends her stuff for her to bless with her beautiful voice.

Another collaboration he hopes to be doing is with Allen Stone, also American, though he’s constantly on tour.

Tingsek loves to collaborate with other musicians, however, most of them don’t live nearby. A lot of times work has to be done while bouncing between different continents digitally.

“It’s always better to be in the same room, especially if you want a collaboration on a song that will end up on my next album – an album that I treat like a little baby”, he says smiling broadly!

After our talk, I really understand Tingsek’s hard work and his wish to deliver the ultimate album at the beginning of next year. He creates music with loads of soul and love and it explains why he’s got so many passionate fans out there, or as he said it; “hardcore music-loving fans”.