Hans Island / Let Me Be

The first time I heard ‘Don’t Leave’ I was reminded of poetry. Tear-jerking, heart-wrenching poetry that pulls at your very soul.

The expression and content of the lyrics are an essential part of soul music and even more in hip-hop, which is in the heart of petite Swedish singer Adée (Ida Adée Olsson). The 2:30 min track achieves more in its short running time than many and leaves an unforgettable imprint on your musical consciousness.

I give you all that I have that doesn’t belong to you
Sometimes we need to accept what is bad and turn it to something good
If your air runs out, I will do the breathing for you

If light can shine through these heavy drapes,
and bring light to this room of sorrow
We should give up looking for fire-escapes and live today, not tomorrow

But if your air runs out, I will do the breathing for you
I’ll be your Iron Lung, nobody shares the pain like we do

I need you to fight this with me
But if you step down, I would understand,
but I wouldn’t forgive you quickly

But if your air runs out, I will do the breathing for you
I’ll be your Iron Lung, nobody shares the pain like we do

The 26 year old singer isn’t wearing her gold earnings and numerous golden bracelets I’ve become familiar with from her profile pictures as we meet in a bustling Stockholm café, and she smiles warmly as we reminisce the Scandinavian Soul Music Awards.

“I know I’m more hip-hop but I felt at home at the soul awards,” she says.

We love the track ‘Don’t Leave’. We presume there’s a story behind the lyrics?

Many people have their own ideas and what it means to them, but my brother has a Lung disease and they said he would only live until he was twelve. I spent my childhood circling around this but I never experienced it as something bad. He’s 29 now and has his own family and this song means a lot to me. It was my way of saying I love him.

Yes (laughs) it’s because I write a lot by myself. When I was in a hip-hop band they were always too long. This time I was like “that’s it!”

So hip-hop was how you got started?

It was down to my brother whose a rapper and he would have his friends over. I was always jealous and wanted to be a part of it. I used to play the flute and it was my teacher who suggested I try singing. My brother was like ‘oh, you’re kind of good at that, I could use you’

My first recordings were in the living room and it was the best thing I’ve ever done. I was so proud to be in his circle, and I even met my soon-to-be husband, who’s a rapper too!

For me, singers sometimes focus too much on the sound, rather than the lyrics and lyrics are very important to me. I also like hip-hop because it’s so raw. It gets to the point. I want to be in the middle somewhere.

And for soulful inspiration?

I learned a lot about singing from listening to singers like Erykah Badu and Beyonce.

So, when you rap is it explicit or family friendly?

I believe every person has about 10 personalities and we chose to show some of them. I try to use my vocals to express all the sides of me, the crazy bitch, the good girl, etc…

We were introduced to you with the track ‘Woman’ which has become a bit of an anthem. How did this come about?

The track was planned to be my first single from the EP and I wanted to have another rapper guesting on it. So, I contacted Cleo (from Femtastic) and asked her if she wanted to do the second verse. A couple of weeks later I got an email from her manager and she asked if Nordiskt Forum could use my song.

So, Cleo had pitched it for me and I didn’t hesitate to say yes. It meant a lot to me that Woman got the hype it got because I got to play at Nyhetsmorgon TV4  (Swedish Morning program) and at the opening show at Malmö Arena. This got me in contact with Music Help Sweden who I signed with in September 2014.

You’ve released your first EP One Step Closer in 2013 and your second EP, Honestly in 2014. Will we be expecting an album soon?

Yeah, an album is coming but I expect it will land in 2016 and it has to be on vinyl too.

You grew up on an island, Öland right? How would you say that environment affected you as a person?

Yes it’s small, around 25,000 people live there and around 300 kids were in my school. Personally, I guess I’m a bit of a farmer. I have two horses and I’m glad I’ve not changed while trying to do both (singing/riding).

Is this how you spend all your spare time?

I try to write every weekend. I’ve spent this winter being creative and working on my debut album. I’ve written like never before. Last summer, I found my sound and winter has been fun. Together with a hip-hop producer and a funk, jazz guitarist we are a good team who compliment each other.

Where I grew up there’s a lot of metal, country music and Christian pop. There’s a bit of hip-hop, but it’s really nice to invite neighbours to my events as I believe you have to start your foundation at home. I always hold a summer concert and all the farm owners are always coming. I like it there.

Actually, a few years ago I performed for the King of Sweden and since then I seem to have a lot of older male fans too! (We both laughed!) 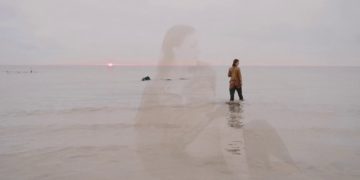