Around ten years ago, I found myself becoming disillusioned with music and wondered where the once majestic vibes of soul music, in particular, were headed.

However, over the past several years my fears have been elevated not just through this website but by a string of soul/neo-soul artists like Lianne La Havas, Jorja Smith, Szar, Solange Knowles and many other international singers who now feature in every modern soul lovers playlist.

And then there’s Swedish singer Fatima who perhaps doesn’t feature in everyone’s playlist…yet.

Fatima’s second album – And Yet it’s all Love, is a sublime blend of alternative soul for perceptive listeners.

For good and bad, there’s no boxing the singer into the commercial ‘hit’ circles as the genre-defying singers’ album delivers an education in contemporary soul, evoking late-night vibes for sophisticated tastes.

It’s been four years since her debut album Yellow Memories and she re-establishes her presence with the mellow and hypnotically cool – Westside.  Attention Span of a Cookie (produced by Natureboy Flako) – hint at her playful side although the song’s subject is rooted in the seriousness within relationships. The track Caught in A Lie is another example.

The whole album takes an introspective look at love and empowering lyrics like ‘Don’t want to be the flavour of the month, no‘ on the hypnotic melody of I See Faces in Everything echo long after the track has ended.

The N-word still (and will always) sit uncomfortably for me so the Roc Marciano rap on – Take it All, took me where I didn’t want to be, which is a shame as the arrangement is magical.

For me, the dramatic strings on Somebody Else define the London-based singer and it’s a highlight of the album. Mind you, So Rite is irresistible too! While Waltz, and the album title track – Yet it’s all Love conjure images of theatrical stages and cinematic soundtracks.

Despite the broad range of producers the album manages to tie cohesively together. The song variations are never sudden and throughout Fatima keeps you fully attentive as these musical relationships take you beyond typical borders. It’s Fatima’s singular, ‘more mature’ vision which is central to the project and the album demonstrates every asset of this versatile Scandinavian songstress.

The album won’t encourage you to dance around the lounge but there’s plenty enough here for many repeated listens in every setting.

Fatima continues to stand alone, and that's a great thing. 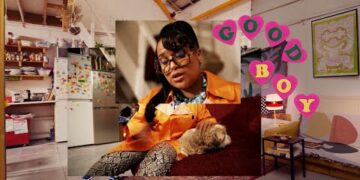