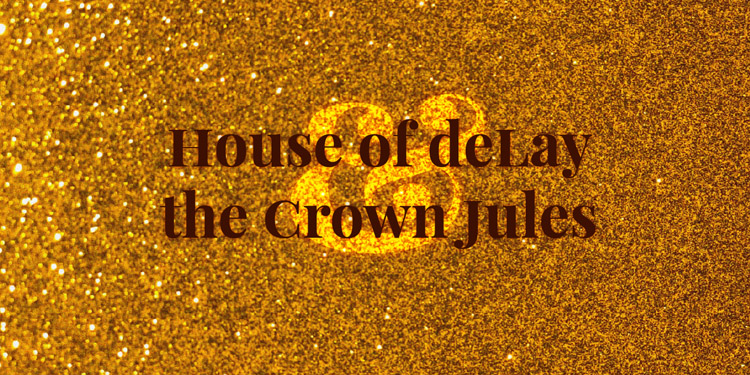 Introducing House of deLay and The Crown Jules

From the title, you would think we were talking about a new Netflix series. Instead, it’s the name of a new Icelandic band featuring lead singer The Crown Jules. And this band is worth just as much of your attention.

In December 2019, House of deLay and The Crown Jules released two debut singles – With You and Me. The track – Me, in particular, is where we come in.

Me, hits with a soulful, house expression and an arresting ‘blue-eyed soul’ vocal. I’m not particularly eager to use that expression but having been recently listening to US singer Tad Robinson, The Crown Jules vocal delivery compares favourably. The Crown Jules has serious soul pipes!

The single hints of nostalgic soul while layered in jazz, funk and the irresistible dancefloor beat of house music.

Still a little raw in production the single has every musical ingredient to make an immediate impact. Midway through, I stopped the track and started it again. Only killer tracks deserve a rewind.

House of deLay and The Crown Jules / First-ever interview

After racking up a catalogue of unfinished ideas for songs, things were set in motion when Julli (The Crown Jules) approached Kristjan Hafsteinsson after a gig. He explained he was a singer and Kristjan suggested he might have some tracks that could fit his style.

Speaking to Kristjan Hafsteinsson, he explained the birth of the band.

“When Julli walked into the studio and opened his mouth, I was sold! This would work! The man sings like an angel!“ Kristjan continued, “Iceland is a small place, and pretty much everybody knows each other, or at least of each other. People work quite openly with one another. But like in other places in the world people tend to gravitate towards like-minded individuals. As a result, we all have a core group of people that we work most with.”

“When starting this project, we decided to have a few different people involved that would influence the project each in their own way. For that reason, three guitarists are part of the project and three drummers.”

“So a little bit regarding who is part of this project. House of deLay and The Crown Jules consists of “The Crown Jules” (Júlíus E. Júlíusson) who provides vocals and writes lyrics and music. Me (Kristjan Hafsteinsson) bass, writer, arranger, producer, recorder and mixer, and Stefan Henrysson keyboard, composer, arranger and producer. Everybody contributes and has put their mark on the songs.”

“Daniel Freyr Sigurðsson, Þorvaldur Ingveldarson and Sverrirsson Sævarsson play drums and percussion, and their interpretation has had an enormous impact on the overall feel and sound.”

“Guitarists Guðbjartur Sigurbergsson, Johann Guðmundsson and Pétur Hallgrimsson provide our project added versatility, and each of them brings a lot of character.”

“House of deLay has a full album recorded with The Crown Jules that we are starting to trickle out and hopefully we’ll have the whole album available for everybody to hear.”

With more tracks coming soon file this band with an unforgettable name under ‘BANDS TO FOLLOW’.

The new decade has started off sounding great!