The 19th of September sees the release of the internationally acclaimed Mary’s Mine album ‘Another Day Through Beats & Pieces’.

Mary’s Mine has caught the attention of English, German and Japanese DJs and played frequently in both English and German radio stations. Now she releases her first full-length album that is a melting pot of 70’s soul, hip hop beats and pop melodies. Producers for the album are Embee (Looptroop Rockers, Timbuktu, etc.) and Povel Olsson (The Royal Concept, MRTN, etc.). 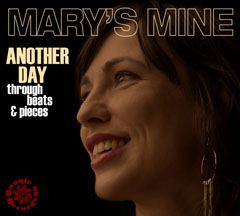 – The album is about vulnerability in various forms, says Mary’s Mine who wrote all the songs except for a cover of an early Michael Jackson song. There, she is accompanied by one of the best soul voices; Melo aka Nils Customs.

– It was not a conscious thought when I wrote the songs, but in hindsight, I see the common thread evident, continues Mary’s Mine (Maria Friberg).

“Marvin”, which is available in a new version on the album, is a personal homage to Marvin Gaye, one of many soul icons that have meant a lot to Mary’s Mine. The love of soul began when she was discovered at an early age Michael Jackson’s “Off the Wall” and Stevie Wonder’s “Songs in the Key of Life.”

– I have always been fascinated by the voices of all kinds. But above all, I loved the soulful voices and grooving music of soul, jazz and blues, said Mary’s Mine.

The album ‘Another Day through Beats & Pieces’ is released on 19th September.

See Mary’s Mine on 21 September at Fasching in Stockholm

Read our interview with Mary’s Mine here