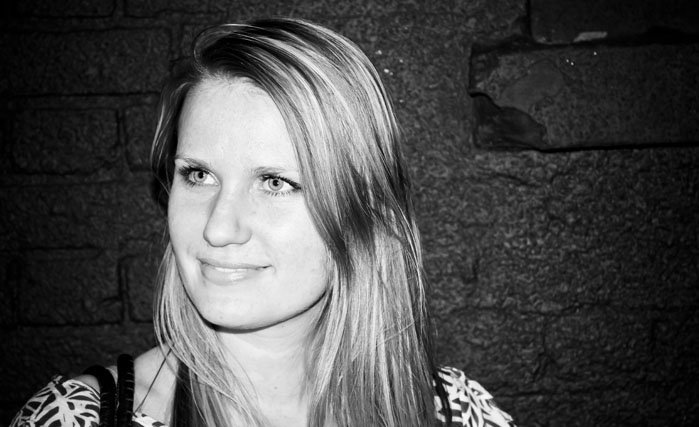 In the heart of London, one of the world’s greatest cities, there are still secrets to be discovered. Those secrets are seen, from our perspective, even better when they did not originate in England.

Originally from Jönköping in Sweden, Scandinavian singer Karin Fransson has lived in London for the past seven years. Her smooth debut album “Private Behaviour” has been on my playlist for a while, so I was pleased that our timetables crossed during my visit to this busy city.

The black door Karin leads me to opens into a bar called “The Scotch”, located in the heart of Mayfair. It is quiet and secluded from the surrounding busy streets. The bar area is small, with a staircase leading to a slightly larger area below. Karin tells me that no pictures are allowed here.

“I love this place,” Karin tells me softly as we settle into plush seats. “I’ve haven’t played here but it’s a great setting for discovering new acts.”

Scandinavian Soul – Was it a daunting change to live in England, and had you been here before?

Karin – “I was very independent. I think I left home when I was sixteen, and then when I was eighteen I went to Rome, where I met a guy and we travelled – Yes, I was pretty fearless when it came to travelling. Meanwhile, I was doing everything besides music, such as applying to work as a chef. It was a friend who suggested studying music in London. A month later, here I was.”

“At that point, I didn’t own my own guitar, I had just played my dad’s. I saved up and bought mine halfway through my first year.”

Tell me about your guitar. 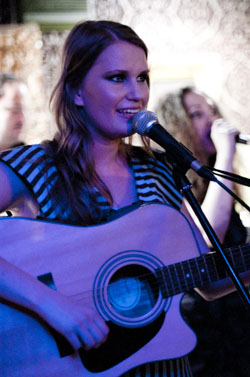 “It’s my baby. It’s a Fender semi-acoustic. The Tanglewood was a very attractive alternative but the neck was better on the Fender and easier to play. I like it, and it likes me and we have a nice time together.”

Self taught?
The performance and production music course helped me learn all the basics like logic, etc., however, I’m self-taught on the guitar.

Did that ability come from your parents? Are they musical?
“My dad plays the acoustic guitar; he always plays, he plays almost every day in the living room. He always plays the regular tunes; Bob Dylan, the Beatles, and listening to Motown and Jazz…so I got a lot of musical education from him.  “He didn’t actually teach me the guitar, as his patience is shorter than mine when it comes to teaching, well…sometimes.” She smiles. “So I studied from a book instead.”

What music were you listening to at that time?
“I just loved Ella Fitzgerald. When I first heard her I was like, ‘Wow! Shit! She can sing!’ She has this amazing technique with this really beautiful tone. I guess I tried to model myself on her. But yeah, thanks to Dad, I listen to a lot of different things. I also play the viola and Swedish folk music.”

So, you’re here, living in London, can you recall your first performance?
“Yeah…I started at an open mic gig, just me and my guitar – very nerve-wracking.”

Did you perform your own material?
“Yeah, the early ones, like ‘Move On’ on the album and another song called ‘Something has changed. It’s nice. I can kind of hide behind my guitar.”

So I guess you’re saying you’re not a dancer.
“No,” she laughs. “It’s not really right for my stuff anyway. I might go crazy one day though…”

Karin, I really enjoyed listening to the album, it’s very personal and although soulful, it does also have other sounds and influences such as a reggae vibe on “Good Old Thing”.
“Yes, for example, I tried many different rhythms on ‘Good Old Thing’ but then I had like the best reggae drummer ‘Richie Stevens’ available and that was the only rhythm that worked.

In fact that these last seven years have kind of lead up to me making the album and it features a lot of the great musicians I’ve come across and worked within that time.   So yeah, you could also say ‘Private Behaviour’ has been quite self-therapeutic.

The title stands for exactly what I feel these songs are… my private behaviour, it was tough but it had to come out. It’ll be interesting to see what happens with the next one.”

Who produced the album?
“I did. I’m a writer, producer and arranger” she says with a huge smile.

And we heard there’s a tribute being made to your album, right?
“Yeah, it’s called ‘Private Behaviour in 88 Keys’ by Wills Morgan and he’s doing covers from my album. I’m very flattered. Getting good feedback warms the soul…it really, really does.”

The melodic sounds of a band begin to ebb from the basement stage below us and at this point, our presence is required to join them. But I have no real desire, as I’ve already found the wonderful secret I was in search of all along.