Mensahighlife brings the homeless’s plight into focus with a Swedish sung soul single – GLÖD – EN SÅNG FÖR DE HEMLÖSA. Directly translating as ‘A Song For The Homeless‘, Mensahighlife delivers a message from the soul as he pleads for more help and support from those in power.

The guitar wails like a lonely cry at night

There is an erroneous misconception of homelessness being the cause of bad choices or drugs. Living on the streets is never a choice. Despite countries with an abundance of wealth, people many are just a pay packet away from homelessness. ‘It only happens to other people‘ is a comforting fallacy.

Everyone has their own story, and the entrancing video, directed by Andreas L Fotos, Stevie Nii-Adu Mensah (Mensahighlife) and Duncan Mukada, brings a group of homeless people together in a community of abandoned voices. Together they are no longer alone.

Telling the stories of our society through soul music is where soul music began. While the messages change, Mensahighlife keeps the tradition well and truly alive. 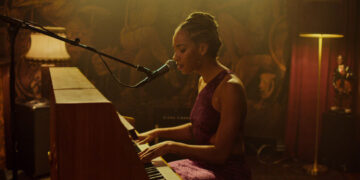