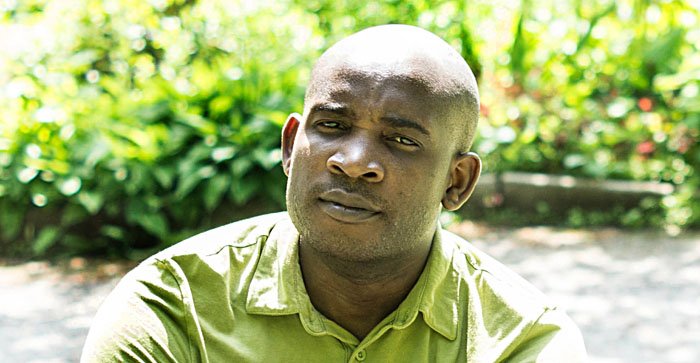 He talks with a heavy and husky voice. A voice that, when he sings, turns smooth and bears promises of something great, and together with his name full of historical references, sets expectations high.

His name is Luther Martin Kintu and one is immediately surprised to find him in a storage room in Stockholm, awakening from the darkest period of his life.

It’s a cold room; the walls are naked and dull. Luther stares at the mixer board in front of him, fully engaged in mastering his new song. The room he is sitting in is not built for living in, but yet this has been his home for quite a while.

It was not meant to be like this, and this was not the plan. But sometimes things happen in strange ways and our life takes genuinely unexpected detours. For him, it has been a detour lasting for almost two decades.

– People often ask me why I don’t speak so much Swedish after all this time here. The short answer would be that I’m still only passing by, but somehow got delayed in Sweden. The long version is, well, let’s just say it’s a bit more complicated than that.

Luther Martin Kintu was born forty years ago in the Masaka district in Uganda but grew up in the capital Kampala. His father died when he was eleven years old, and he spent most of his childhood with his mother and the rest of his family.

From an early age, he fostered an interest for music and while he was young he started to perform and sing at fancy hotels and nightclubs. Luther became a big music star in Uganda, and he was a part of laying the foundation for the modern music scene in the country. Luther could have stayed in Uganda to continue his successful career as a local artist, but he wanted to reach a bigger and wider audience. So as a young man with big dreams, he left Uganda looking to break through on the international scene. Having met some European music producers, Luther came to Sweden, where he joined a group called Swahili Nation. 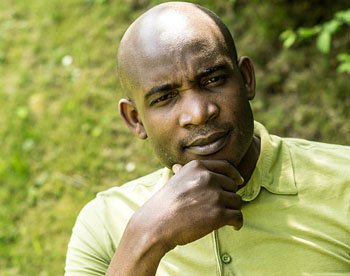 – I was young back then, a little bit naïve as are most people in their twenties. I came to Europe and received a lot of promises. The world was open to me and I was unstoppable!

But things did not turn out as planned. Back then, in the nineties in Sweden, the music industry was in a frenzy; people earned a lot of money selling cd’s and the Swedish music scene was really booming with artists like Robyn and Leila K so Luther found himself drifting in between other projects to tide him over. The promises he was made turned out to be empty promises, and in the end, he was left with no option but to make it on his own without knowing anyone nor how the Swedish society worked.

The one thing he knew was that, returning to Uganda was not an option; that would have been too much of a failure so he stayed, mainly to keep on trying and finding other ways. He was the promising young Ugandan who was destined to make it big. He would not settle for anything less.

– It was a very hectic time; I lived in studios, stayed at friends’ and worked on my music 24-7. I also met a woman she and she became pregnant. My daughter Pauline is 17 years old today, and she’s the reason why I´m still alive. But back then I was really not mature enough to be a dad, I realize that now.

A couple of striving years past. Luther got some gigs and opened the show for some big names, such as K-Ci & Jo-Jo among others, and then he started to work on his own material, and eventually he also managed to clutch a deal to make a full-length album called Single Man. It was hard work and of course, it came with a lot of stress. But he was unstoppable, now was the time for Luther Martin Kintu.

– Then it was all about shallow things and cheesy love songs. But nowadays I see things differently, when I came to Sweden to make it, I was only in my twenties, now I´m 40 and have been through a lot.

One night, just when the album was finished, he collapsed in the bathroom and had to seek medical attention. At first the doctors could not find the cause of the pain he was suffering in his chest. It took a couple of days of waiting around at the hospital, many medical tests, and doctors trying to discover what was wrong. After a long wait came the dreaded diagnosis – cancer, and it was a severe form called Hodgkin’s Lymphoma. The tumour was placed right between his heart and lungs, making it too risky to operate on.

Thus, Luther found himself in a foreign country, without knowing the language, and far away from his family.  He went from just being about to make it as an artist, to laying alone in a hospital bed not knowing whether or not he would survive.

– I didn´t understand it at first. I just tried to think it away. I didn´t want to tell my family down in Uganda what had really happened, I didn’t want to worry them. And my daughter Pauline, she was too small to understand. Her mum and I had broken up shortly before the cancer arrived. I felt so terribly alone. 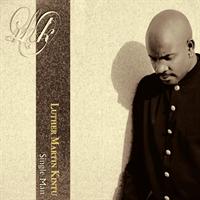 The Album ‘Single man’ that he had worked so hard on to finish was left to collect dust in boxes; unable to be released. The chemotherapy treatment was very thorough, and it required him to stay at the hospital for at least eight months.

Then, along came the long struggle against the disease and the fear that the cancer would come back. It was a dark period in Luther’s life but he survived and the cancer slowly disappeared from his body.

Today he can see that the worst period came after he was declared free of cancer.

Like many others in his situation, this is when the really hard part begins: the depression.

You survived, and are expected to be happy, but something has happened in your soul, you suddenly know that death could be just waiting around the corner.

Luther locked himself in in his apartment, looking at American news on the internet, doing more music and pretending that everything was just fine. He did not trust anyone; he did not want to return to Africa because that would have made the failure even more real. It was better to just close the door and create a world of his own where no one could let him down, and where there was no failure possible; a world under his control.

– After I was declared free from cancer I hit rock bottom. Many times I wondered what to live for, but then I came to think of my daughter Pauline. If not for myself, at least I had to live for her. She saved me without knowing it. And I also did some serious thinking, I’m a different man today, and I value things in a totally different way. It changed me fundamentally.

Now, Luther just woke up from a long deep sleep.

To mark his awakening he symbolically released his old album Single Man, ten years too late. And it is not until now he has started to write new music again for real.

Luther Martin Kintu is a soul singer and soul music should be held close to the heart. To him, music is now closer to the heart than ever before.

The tumor that almost killed him was also by his heart only leaving a small scar on his chest, as reminder. Now, he’s finally ready to live again. He looks at the mixer, carefully monitoring the audio levels. He recently found a real place to live in, so the storage room with the dull walls can be just a studio.

Luther Martin Kintu is back. 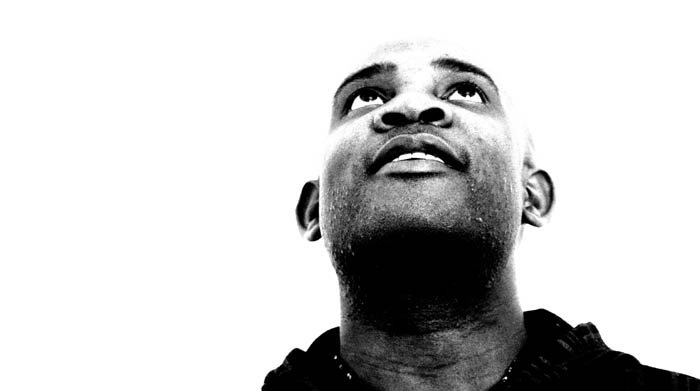