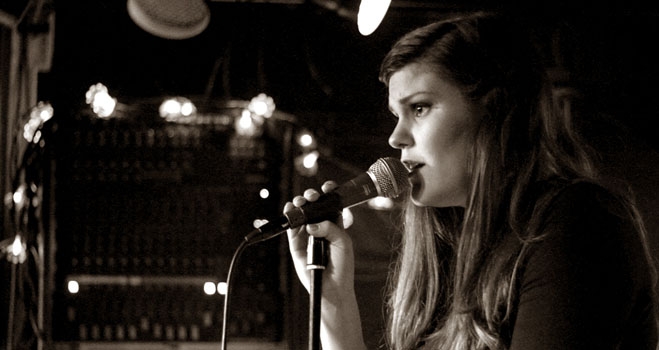 Elias Sahlin / Until I'm There

Interview with the raw and fresh Danish soulful blues singer.

No, tonight I wouldn’t be out showing my dancing skills (which, by the way, have deserted me years ago) instead I sat with a cup of Coffee resting beside me, a pen and paper poised, and my phone fully charged. Tonight I’d be interviewing the compelling Danish Singer Sahra da Silva whose EP ‘Sahra da Silva and the Jagged Soul’ has been extremely well received here on Scandinaviansoul.com.

As she answers my call I hear her voice float in my ear and it’s distinct but not as raspy as one might expect. We began by discussing her name, background and influences.

Sahra da Silva –My dad is from Portugal which explains my surname. My parents separated when I was young and my mum worked hard to support us. Basically, my brother and I didn’t have much growing up.

My mum loves to dance and sing but not seriously, but she sang to me a lot, I just felt it was fun [to sing too]. My mum influenced me with country, Rock and Blues and we listened to artists like Dire Straits, The Beatles and a great 70’s Danish singer/Songwriter called Kim Larsen.

As a teenager, I was into R&B and Nu Soul and I was eager to find out more about it. I downloaded loads of songs and when I was about 18/19 I discovered Joss Stone. I think it was her who opened my eyes to old soul singers like Aretha Franklin and Al Green. I would then listen to a Radio channel that played old disco every Friday night.

SSoul: Were you writing around this time?

I wrote my first real song at 14. At that time I was playing in a music school band and -choir and knew I wanted to spend my life in music.

One day my friend called me and said, “you have to enter this show [she’d heard of]“ so at 15, I entered a small local talent show; it was [shown] on a special channel. I played on the Keyboard but only knew a few chords so I figured out how to use the “One Touch System”, haha, which means I could press only the A-key and it would play the whole chord with a little “mini-MIDI-band”.

It came easier to me the singing than playing instruments, I still try but I prefer to sing. Anyway I won it… but it was a really small show.

Congratulations, but how did that make you feel?

Well, I was sure this was what I wanted to do. After that a lot of people started calling up me, some of them wanted to feed me with “hits” and make into ‘a Danish Britney Spears’! (I can hear her smiling as she says it)  but I really wanted to write my own stuff and not go down the Pop route.  I had heard so many bad things about the industry that I didn’t know who to trust. I decided to cut them all off and take the time instead to write songs and basically grow up. 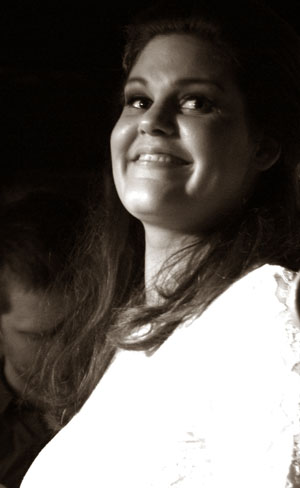 In 2004 I began working with a producer/beat-maker. We made a lot of tracks; it was electronic soul, all programmed – actually the first version of “Soulmate” was made with him. I really yearned to play live with musicians instead of backtracks so a friend of mine took me to Mojo Blues Bar where fell in love with the place and the good vibe right away.

That is, without doubt, where I found myself as a real musician and a person. Also during these years, I collected my fantastic band “the Jagged Soul”.

You then went on to appear on ‘Denmarks Got Talent’ in 2010 on which the Judges and the audience gave you a standing ovation, how did you find it?

It was a good experience; fun, exciting and stressful. There are so many things that can go wrong! It was fun to see how everything worked with strict arrangements. It was great.

How far did you go in the competition?

To the semi-final, then I got kicked out on my ass! (we both laughed!). That week I got the least amount of votes. I sang ‘Leaving you Behind’, and it was a good performance but maybe too angry for Denmark.

I do good angry

Really? Which is a good point. How would you describe yourself?

I’m a bit of a rebel. I understand rules are there to follow but if I feel it’s just a rule then I don’t give a shit. I cross when it’s red! I do whatever makes sense.

I do have a temper. It’s rare but I can get frustrated and sad but I now know how to handle it. I can see things from another perspective. I do good angry now.

I also read that you’d lost your voice

Yes. Autumn 2011. My voice just couldn’t take it. I’d recorded the EP and in particular ‘Soulmate’ with smoke in my lungs. On 15 February 2012, I said I didn’t want to smoke any more. It’s not nice to be smoking and it resulted in edemas (blisters) on my vocal cords and a whole year of coaching but now it feels great to sing again. I was scared to push it at first but it’s slowly coming back. I’m still wild!

Ahh, I love the track ‘Soulmate’ (I called it a Scandinavian Soul Classic), how has the single and EP been received and what’s your future plan?

Thank you. I feel the songs are long so it’s hard [to get it played] but I’m also writing lots of new stuff. We hope to make a video for ‘Don’t you Dare’.

…and finally, how will you be spending your wild Saturday night?

Haha, cooking Coq Au Vin for my friend who will be here soon!