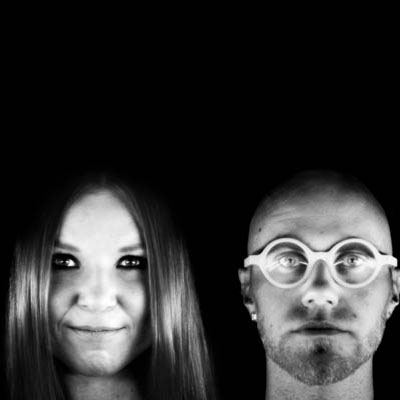 ON A BREAK FROM THE STUDIO

Heikki (aka Akanuke) plays several instruments and has experimented with almost all music styles, from Classical to Death Metal. It was by coincidence that he got involved in making hip-hop. In 2005, he came up with an idea to make hip-hop music into sign language. He created a group called Signmark with a deaf friend, and together they performed in 20+ countries all over the world.

Lead vocalist Tiia (aka Anahata) started as a classical flute player but changed her main instrument to singing, and her music style to jazz. She has also released her own rock-influenced pop music and is a teacher for young vocalists in the most appreciated pop and jazz conservatory in Finland. In addition to this, Tiia designs clothes and creates her own personal collections.

Akanuke is originally from the Helsinki suburbs and Anahata hails from the Arctic Circle. Together, Humus brings a joining synergy of the best of both worlds with their common passion for good music.

Humus started making music in 2009, originally sung in Finnish but changed to English in 2011. After this change, Humus began receiving growing international interest.

Music is not the only form of art in which Humus is active. Humus makes and films their own videos, including a 30-minute musical film, which has been screened in several film festivals in Finland. Akanuke directed the film and Anahata played the main role.