A soundtrack fitting for the streets of NYC

We’ve not swapped the calming waters of Stockholms’ archipelago for the busy metropolis of New York, but Daniel Fridell certainly takes us there. Musically and visually the Danish composer presents an instrumental multi-layered in jazz and funk, forming a perfect soundtrack to the Big Apple’s iconic backdrop images.

The One – is taken from his new album Soulrebel, released on Jonas Music, and Daniel summarises his music below:

“I love music. This album [Soulrebel] is basically a jam session with myself. Growing up, I used to record music this way. Starting with a drum machine track, then a drum track, bass, guitar, keyboards – creating the music track by track, note by note. I wanted to do that again, it’s an intuitive and fun way of doing music. I recorded these jams during late nights after finishing other sessions, setting up all the instruments in the control room of my studio: a 60’s Slingerland drum kit, a 70’s Fender Jazz bass, a 70’s Rhodes electric piano, a Juno 60 synthesizer, a Moog Rogue synthesizer, a Yamaha YC10 organ, a Fender Tele Custom electric guitar, a Nord Electro and Nord Modular G2 keyboards. So, inspired by masters of all the amazing and creative late 60’s and 70’s music like Herbie Hancock, Chick Corea, Sly and The Family Stone, Shuggie Otis, George Duke, King Crimson, the melodic bass lines of Aston Barret of the Wailers and everything in between, I just went at it.”

The video is released in collaboration with Le Mellotron. Le Mellotron is an independent online radio station based in a bar in Paris with an eclectic selection curated for and by music lovers. 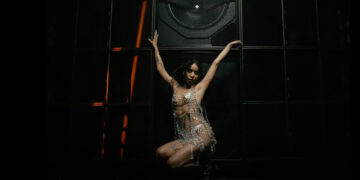