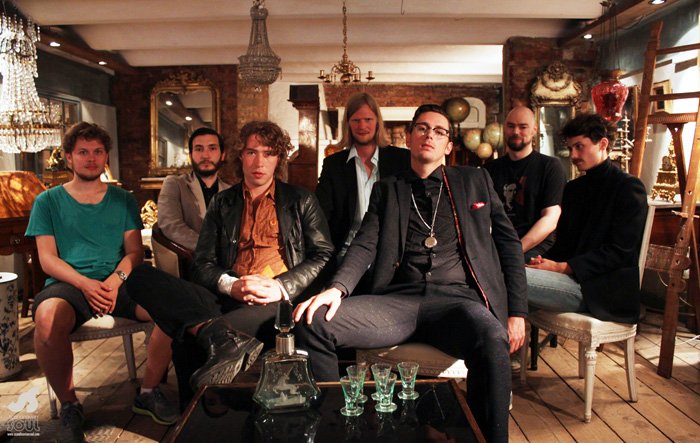 I discovered Swedish soul band The Magnolia through a friend who described how she was sitting on her floor crying out of pure happiness while watching a clip of their song ‘White as Snow’. Now, after having seen them perform live, surrounded by the sunset in Gothenburg, I can completely see why.

‘Andra Långdagen’ – a street festival in Gothenburg, Sweden, has steadily grown over the last few years and this is my first visit to the event. The idea of this festival is, with no one in charge, that anyone (no matter the genre or culture) can join this big party in any way they want to. I overheard some young people saying that ‘this is the best day of the year’.

The six band members of The Magnolia have made themselves comfortable outside the vintage shop Le Village having even laid down a Turkish carpet to make themselves feel more at home.

Once lead singers Albin Meldau and Arvid Nero start singing their track ‘Sexual Voodoo’, the band gets a nice half-moon-shaped crowd. I see all kinds of people come to stop and listen, some taking a seat directly on the grey asphalt.

All band members are old friends, born and raised in the same neighbourhood – some were even in the same class together at school. After having played together for around three/four years, The Magnolia has now, slowly, become established as the new exciting upcoming soul band in Gothenburg.

The Magnolia will also perform later in the evening at ‘Stigbergstorget‘, and in between their two sets I ask them why they’ve chosen soul music.

“It’s all personal really, but we all love soul music, says Albin Meldau. We like different kinds of music, but soul music is the main genre that we all listen to. We try to do our own interpretation of the whole concept and we try to create something new. I wouldn’t really call it soul music in its literal sense.. as we try to make soul music in our own unique way”.

Their music is primarily inspired by soul artists like Al Green and by the Southern American soul scene. Singer Arvid Nero says that he’s been listening to a lot of blues, but also to artists like Leonard Cohen and Bob Dylan. The sound and lyrics of America has inspired him a lot, and the way he sometimes pronounces the words tells me even more about this fascination.

“We want to do music that people live their lives to. We do play soul, so it’s love making music. We try to be as broad as possible in our approach, and not stick to one specific sound. Soul music can be broad”, continues Albin as we talk about what people might experience when listening to The Magnolia.

Later that evening the festival has turned into a massive street party.

People start to dance anywhere they hear good music, and some of the crowd starts to get undressed – well….. not fully naked as the Swedish stereotype would have you believe. It’s like I’ve left Sweden, and for a short while, I’m just standing still on the street watching these happy people! And I’m wondering if this would ever happen in Stockholm, people being free and not doing anything other than dancing together.

When we talk about the soul scene in Gothenburg they describe their city as “a city full of DJs” (or “fanatic hobbyists”) who play ‘very expensive’ records. Albin Meldau also mentions Daniel Lemma, who’s a well-known Swedish artist based in Gothenburg.

“He’s a great composer, a great man and a good friend. He does all kinds of things. When it comes to reggae, blues or soul music; there’s no difference. What Daniel Lemma does is everything, but really, he’s a soul singer. His reputation as a musician and artist is something for us to be inspired by.”

Just before The Magnolia goes up on stage, I see Daniel Lemma, who is sitting just next to where the guys are set up. We talk about the emerging soul scene in Gothenburg.

“I think the music scene in Gothenburg is special, mainly due to the culture of indie, rock and pop music. All of us who do not fit into these genres collaborate – without having to think of our musical styles and what generations we come from etc. There’s a nice vibe here, people from Stockholm have commented on that before . There’s no prestige here”.

He also says that there is no big crowd to create soul music for in Gothenburg and most gigs are in Stockholm, where he thinks artists can establish themselves easier as soul artists.

Now, at ‘Stigbergstorget’, there are no DJs playing load house music or naked young people dancing around, instead kids are running around bare footed and people are relaxing in anticipation of The Magnolia. The atmosphere is boiling with love, tonight Sweden is at its finest on a warm summer evening.

Some guys at the front start dancing while The Magnolia play. A group of women smile and sing-along, seeming to know every single word. As they come off stage, a range of people come up for a chat or a quick photo.

“A live performance consists of us meeting the crowd; we invite them to this feeling of being created together. They are part of the experience, with all minor mistakes that happen up on stage. We felt we played just 50%, and the crowd gave us the rest”.

I hadn’t noticed, and instead could only agree with what Gabriel had said to me earlier, “live music makes people happy”. 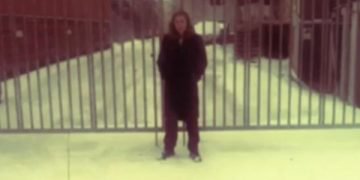