Music is a Circus

Naked Ivy / Closer to My Dreams

Young people today only listen to what’s ‘hot’ in the pop charts and dream of being the next Justin Bieber or Miley Cyrus. Perhaps we’ve all been guilty of thinking like this, but maybe it’s time to think again. In 2012, five young people between the ages of 16 and 19 crossed musical paths and decided to form a band called ‘Naked Ivy’, and the result gives us real hope for the future.

What makes them exciting is that their influences are from innovative funk, soul, pop, and jazz, and they have been rehearsing tirelessly to create the right sound. It’s clearly working as the cool horns and lead singer Karen la Cour’s sweet soul vocals combine on their superb track ‘Closer to My Dreams’.

Naked Ivy is settling down in the Danish music scene, enjoying the creative studio processes whilst exploring Danish venues. This led to three fresh, new band members in the form of two saxophonists and a trombonist. The result has been a wider soundstage, securing the band’s journey to the final stage of “Emergenza” – a competition for up-and-coming bands where they perform at venues like Rust, Lille Vega, and the particularly renowned venue Store Vega.

Having just performed at Mojo’s Blues Bar on Soulful Tuesday, we already know this is a band with a promising future. Just don’t expect to see Naked Ivy swinging from a Wreckin’ Ball any time soon! 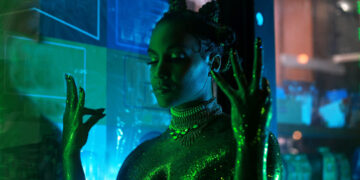