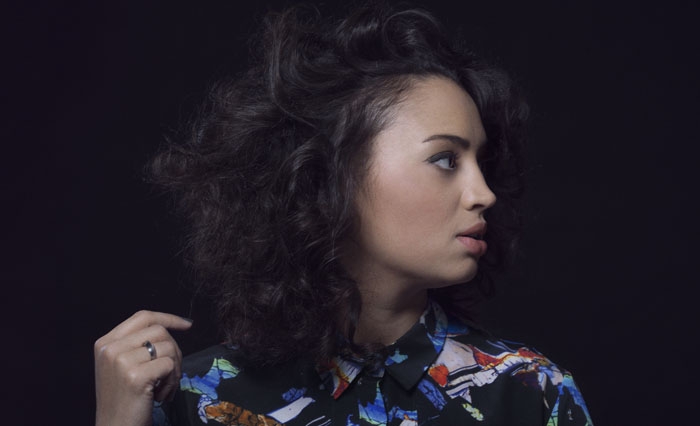 It’s warm. The sun is almost blindingly bright and it feels like summer has already begun. Naomi Pilgrim hands me her cellphone and lets me listen to her new single ‘House of Dreams’, which will officially be released at the beginning of May. Naomi’s warm voice, backed by a heavy base and dreamlike suggestive sounds, creates an intensely atmospheric song.

The track she lets me sneak a peek of has been long-awaited. In only a short amount of time, she became a hyped artist – not only in her home country Sweden, but also abroad. Her fans have been eager to hear this follow-up to her highly celebrated debut ‘No Gun’ released last October.

Since its release, Naomi has become the person to talk about, and an artist that all the bloggers write about. Her step into the spotlight was short but has had a long-lasting impact. During the release of “No Gun”, a key scene took place for both the artist and person Naomi Pilgrim.

Around 80 people were gathered at ‘Landet‘, a restaurant located in Telefonplan just outside of central Stockholm. There was only a small stage inside where Naomi was going to perform, but the invited guests were very important to her. The vibes were buzzing and people were looking toward the stage where an artist would soon be born. They knew that Naomi had been doing music for a long time, but she had always stayed in the background. Some of her friends hardly knew that she was able to sing, and certainly didn’t predict she could do it so well. She had always toned it down; when asked about her music, her replies were hesitant and evasive. Until now.

When Naomi entered the stage, it was her first time as a solo artist – as the person in the spotlight.

“It was wicked. People thought it was so good because it wasn’t only my journey, we all did it together. I had already decided that I wouldn’t be nervous, that I’d enjoy myself upstage and only show this to my friends and family.”

Both in front of her in the audience and behind her on stage were all of the people she was closest to. Her producer, Fredrik Okazaki, played the drums; Freja Leona, one of her best friends, was doing vocals; Carl-Johan Bolin was playing the guitar, and Markus Jägerstedt was behind the piano. 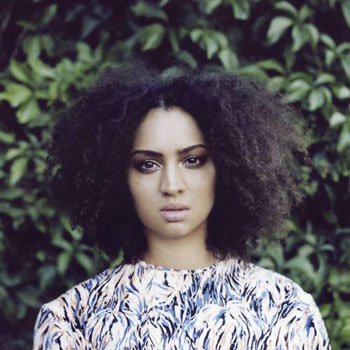 Earlier during dinner, Naomi had been talking to Markus and found out that he had played together with Robyn when she performed Polar Prize-winner Bjork’s ‘Hyper Ballad’ during the prize ceremony.   In fact, not only had he played the song, but he had also arranged it. Now that very same person was on stage with her. Yet perhaps the most overpowering sensation that evening was that in front of her, just below the stage, was her mother, standing and crying tears of happiness.

“Just about then, I knew that I had succeeded. I had made my mum proud. She has been dreaming about this ever since she heard me sing for the first time, so that feeling was incredible.”

Music came into Naomi’s life when she was still a child. Many years before she released her first single, she had already been working with big artists.  It all started when she was fourteen-years-old and waiting for the tube in Hägerstensåsen. She was playing around, just singing for the fun of it like she usually did, when a girl unexpectedly came up to her. “My boyfriend’s a music producer,” she said, “would you be…”

The boyfriend turned out to be internationally renowned music producer Nadir “Red One” Khayat.

This event got her into the music business, and she has been working on and off in the studio since then, although she was always backing up someone else.

“I was hanging out in Red One’s studio and having lots of fun. It was really wicked, like a new world to me. I was singing a lot, making demos for international artists, and that was pretty big. When they had written a song, I got to record them. Being fourteen and getting to work with all of those celebrities was really cool.”

Naomi Pilgrim’s friend and artistic colleague, Vanessa Falk, persuaded her to attend the upper secondary school Modern Soul Academy in Fryshuset. Singing was among the best thing Naomi knew, but something held her back – she was suffering from performance anxiety. Due to this, she barely made one solo performance until her third year.

“I found it very difficult in school. Having your passion being judged, to subject something that makes you feel so good to be graded, that just felt wrong. When you make music, the critics come. It’s not as scary to sing in the shower and feel good about yourself or back someone else.” 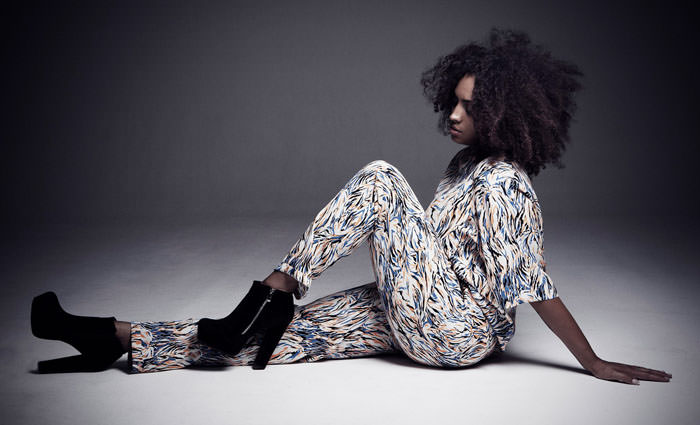 The performance anxiety has, just like the music, accompanied her since childhood.

“If I drew a pretty picture, I would always rip it into pieces. It’s really weird, but when it never turned out to be perfect, I ripped it apart. I really don’t know where it comes from.”

And so it went on for many years. She kept on backing other artists instead of searching for her own spotlight. When someone would call her offering a job, she would always reply with something like “I know the perfect girl for that…”

Still, something was missing. Naomi felt that she was holding back her talent. Deep down, she knew she could make it on her own.

A year before she shared this with me, and just six months before the release of ‘No Gun’, Naomi Pilgrim made up her mind to stop saying no. She decided that she would release herself and let go of the control. Not long after, Åsa Höglund, an employee at the record company Cosmos, called and said: “We need an artist that will perform at the Grammies. Can you play the piano?” She accepted and began rehearsing the song day and night.

Several key factors helped Naomi to make up her mind and stop saying no. In part, she had grown up and matured and realized that you must get rid of those fears of failing to keep your soul happy. But that wasn’t the only thing. 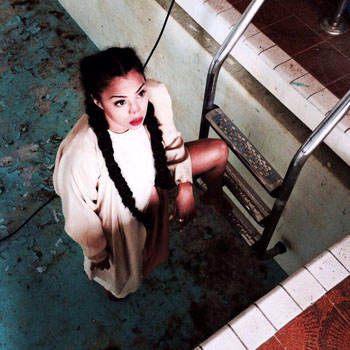 A story she had heard during her studies at the Modern Soul Academy distinctly stuck with her. A teacher of hers, a song coach, had been diagnosed with cancer in her throat at a young age. Naturally, she had been very afraid of the illness and facing death, but what scared her the most was that after the operation, she might never be able to sing again. For Naomi, this story proved to her that she had to do something special during her life; she must dare to let go and throw herself out there.

“It was almost at a level where I was thinking “I’ll make a few good recordings and store them in a safe-deposit box somewhere for future generations. You know so that there’s a story to tell about good old granny.”

She performed the song ‘Can’t Lie to Me’ together with Jasmine Kara at Grammisgalan. The performance was a success. Shortly afterwards, she was contacted by Hugo Scherman of Cosmos, who asked her “Where are you, and where do you want to go?”

There and then, Naomi felt that she would give it a go. Hugo put her up with producer Fredrik Okazaki, and one of the first songs they recorded was a soul song, just to get a feeling for it. From there, they started to play around and experiment. Everything felt great. It started to slowly grow and they eventually started talking about signing a deal. At  Cosmo, it was very important that this happened on Naomi’s terms.

‘It’s your name, so it’s up to you to decide what to do. We don’t want to do anything that makes you uncomfortable.’ Naomi did not have any expectations; she was just enjoying herself and it felt right.

“It was like, ok, I’ve got 1,500 Facebook friends or something like that. If 200 of them listen, it’d be great! That would mean 200 people would get to hear what I’ve been doing over the summer, and that would be really cool.”

Cosmo promoted her in the US and the UK and managed to get her first single ‘No Gun’ released on the music blog ‘Pigeons and Planes’. All in all, far more than 200 of her Facebook friends discovered her immense talent.

Naomi Pilgrim threw herself out and it turned out that she could fly.

Along with the interest for her music came to interest her as a person. She’s now expected to come up with answers to many questions that she’s unsure of, such as what label her music is. Soulpop, Triphop… There are a variety of different labels that could match, but only partially.

Soul music in particular, however, has always been there as a solid foundation.

Naomi describes soul music as something warm yet not easily explained; music with a lot of emotion, music with depth and vulnerability. Another label she can not always relate to is ‘Caribbean-Swedish’. People make a lot of fuss about it, but it also opens the door for questions about how her Caribbean roots have influenced her music.

“I don’t really have a good answer to which label I ‘belong to’. I find it very difficult when people asks me to identify myself, or how my Caribbean background has influenced me. Maybe they have to ask the question because what if I have an interesting reply? But I don’t. It’s just me, Naomi. But at the same time, when you get the question repeatedly, it makes you think about it. I could just sit and say a lot of things, but in ten years I might have an answer. To me, it’s no major thing that my dad’s from Barbados – it’s just how it is. Sometimes it’s just annoying that you have to put a label on everything: homosexual, heterosexual, white, black, green.”

Naomi refills her cup of coffee. Soon ‘House of Dreams‘, her new single, will be released. It was made during a studio session with Fredrik Okazaki and artist Dante Kinnunen. The night prior to recording it, Fredrik had emailed the beat to Naomi. In the studio, everything worked out perfectly.

“It’s really powerful to me. In fact, I feel every word when I sing it. It’s about a feeling. ‘House of Dreams’ is a place, it’s how I want my dream house to feel when I’m there. As a matter of fact, I’m in that place pretty often. You know, when you’re happy, you breathe in and when you breathe out, everything is just vibrating around you. Everything is in harmony and just works out perfectly.

It can be that you’re sitting here in a few weeks’ time and that the buds of the Cherry blossoms have started to bloom. You might be talking about a whole different thing, but when you look up, you’re just hit by this warm fuzzy feeling in the chest. A thing like that.”