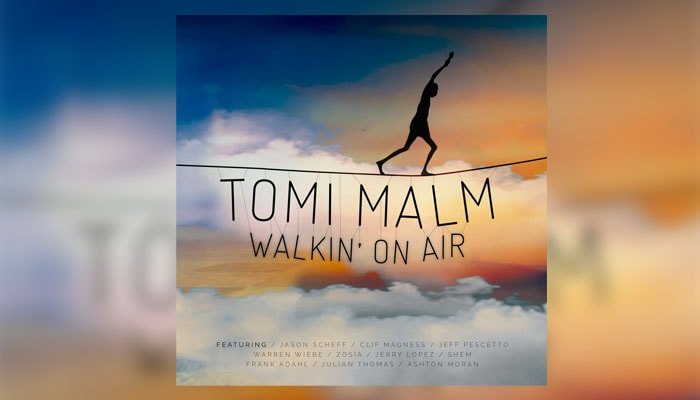 Emily Simbi / Walk With Me

When you have spent the last twenty years building a solid reputation as a composer, arranger, orchestrator, and producer on a multitude of successful records, TV themes and multimedia scores, there is only one logical thing to do next. Release your own debut solo album.

And that is exactly what Walkin’ On Air is, a chance for the Finnish creator Tomi Malm to work without any brief, restrictions or considerations and the result is a glorious collection of songs that range from elegant jazz-infused pop grooves, smokey funk boogies, emotive and soaring ballads and a host of creative genre fusions.

Another advantage of Tomi’s impressive CV is that he is able to put together an impressive music cast to realise this musical vision, from the ubiquitous Simon Philips on drums, go to bassist Alex Al and even former Chicago singer Jason Scheff to name but a few. But a collection of top-flight musicians is nothing without finely constructed music to perform, and this album is nothing if not finely constructed. It is wonderfully textured, deftly layered and weaves together intricate and inventive musical threads but creates a sonic design which is appealing, accessible and often infectious.

As an album it sits in an interesting musical place, blending elements of cool jazz, fusion, soul and west-coast pop, resulting in a sound which is both musically elegant and lyrically eloquent.

The Title track, as they tend to be, is a brilliant calling card for the mood of the album

Yet, for all its smooth edges it is an album which is far too spirited for merely cocktail hour yet not rough enough for those looking for something with a more daredevil vibe.

The Title track, as they tend to be, is a brilliant calling card for the mood of the album, capturing neatly its pop fizz, cool grooves, jazz leanings and inherent soulfulness but there is also room for smooth balladry with the eminently laid-back Perfect Imperfection.

Another standout is Wouldn’t It Be Kinder sitting as it does between the parameters set by the aforementioned tracks, built with both pop-rock muscles but done so with understated elegance.

The best of both worlds perhaps, relaxing, soothing and smooth but too clever and detailed to become mere mood music, but robust, wonderfully deep and intricate without resorting the rough and bombastic. Just a fantastic collection of musicians executing music which has been perfectly conceived. You can’t really fault that.

Just a fantastic collection of musicians executing music which has been perfectly conceived. You can’t really fault that.