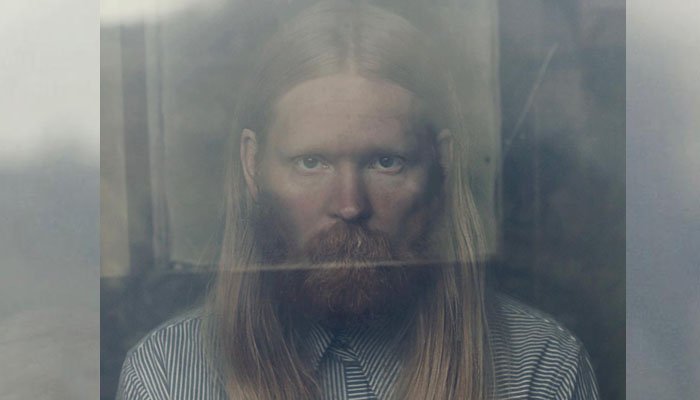 I’m in this place, but my mind is somewhere else

Hedy Lamarr once said ‘All creative people want to do the unexpected.’ This quote came to mind as I prepared to chat with the bearded and long-haired Icelandic singer Junius Meyvant. He is certainly creative and a deliverer of the unexpected.

He’s a musician whose genuine emotive soul, folk/blues expression is as captivating in sound as is the uniqueness of his country of origin. He’s also has a great sense of humour.

It’s a side of him I first detected in a video of his live recording in the Paste Studio NYC for the Manhattan Centre. He humorously acts shocked when told he’s going to perform four songs, before delivering an absorbing acoustic performance. The singer’s recently released second album – Across the Borders has hit the airwaves, and we talked as he starts his European tour. I admit I would have liked to have met Junius Myvant in person.

He is expecting my call, and he answers in English. His Icelandic accent strong and endearing coats his every word.

“I’m at my house in Westman island” he begins. “It’s my day off. My day off is cleaning up the house. My wife is coming from work within an hour. If I’m not done cleaning I’m on the streets. I’m married to an Icelandic Viking woman!”

His humour causes us both to laugh and I describe how I felt this was a part to him I hadn’t expected when listening to his music. “I don’t take life too seriously. Serious enough so people listen. I was the class clown at school. I’m always goofing around. I go off-road many times. I’m a loner and a people person at the same time. There are days I want to be alone and days I want to be around other people.”

“In my hometown its very isolated.

So a bit like the real world, I add. I ask him about his contact with the outside world with the wonderful use of social media.

“Social media is like a small town. I don’t like it. If I wasn’t a musician, I wouldn’t touch it. I don’t like this slavery you become with this phone…experiencing life through this little screen. But social media can help. It helps me when I’m touring, Skype, Facetime etc. I can call my kids and my wife. I don’t like ‘the selfie’ things. You can take a picture of something you really like and get 50 likes – you take a picture of yourself and get 1000 likes. It’s a very narcissistic world we’re living in.”

His words are relatable and a calming honesty emanates in his tone. Having myself never yet visited Iceland I’m curious about finding his musical inspiration when it feels he lives in such a remote global location.

“To do it naturally, you basically do things you like, like fixing the house, drawing a picture or taking a walk. You often get something.  They say – amateurs seek inspiration and professionals go to work. That’s the key. You work your ass off and good things will come if you have something to give.

I live on an island. A lot of cliffs, a lot of bird life and two volcanos. I never go to the mountain top, I’m always in my room looking at the wall. It comes from within I think.”

Expressing what comes from within is also a reflection of inner thoughts of the world around us and I enquire about the album’s title, at a time when US President Trump is demanding more barriers. “There is some political meaning behind the album title Across the Borders” he explains. “All the wars and people trying to get to Europe like from Syria etc. And all the politics about ‘they are all Muslims coming here to blow us up’. A tiny, tiny proportion of them are radicals. We have radicals in every corner of society. The media is feeding us fear, and I think love and acceptance -taking someone in is stopping wars (more) than stopping someone coming.

But of course, there are cultural issues. I’m not a naive child. People are people, and you must always give them a chance. Across the Borders, I was thinking you are not going across some borders in life to get to the places you want to be. Sometimes you’re stuck, physically and mentally.”

As a genre, soul wasn’t where Junius wanted to go. An avid listener to ’60s 70’s soul the sound occurred naturally.

“I wasn’t going to go there. I’m not trying to do this is soul, it just happened. I try to do a more broad music sound. I think it’s the culture I grew up in. I was one of the first guys to skateboard here on the island, and I was into California culture.  I listened to a lot of Wu-Tang Clan too back in the day. I really liked the beat and what was behind the songs. That led me to discover soul, R&B, blues and jazz. I started looking for those albums and I found my world.”

I’d received a review copy of Junius’s album on CD (it is available on vinyl too). Despite my PS4 refusing to play it, an old laptop did, and I listened while admiring the well-designed packaging. The foliage, a muted colour palette and a rather sombre looking Junius opens up to a full folding spread with an inner booklet containing the lyrics. I complimented him on the design and for showing such attention to a fading form.

“If it were up to me, I’d only record analogue, on tape and vinyl. Of course, I made CD’s, and everything is online. My last album was a picture painted by me, but this time I wanted to do a typical 70’s photo. I put a lot of exotic plants you can’t find in Iceland. That’s how I interpret Across the Borders – I’m in this place, but my mind is somewhere else. A typical human being, always somewhere else when we should be right here.”

“The album’s concept is to take one day at a time, and don’t give up. When you grow older its like groundhog day. You have to find some meaning. I think the best thing you can do is to help others and find a community. Find something meaningful and do it as best as you can. Then you can leave your mark on the earth.”