Graciela Chin A Loi brings a positive voice at Fasching

“People are people”, sings Graciela Chin A Loi from the Fasching stage. Political awareness is ever-present during the evening and creates a euphoric feeling as the soul singer performs for the first time under her own name.

We are a stone’s throw from the Central Station in Stockholm. An expectant buzz characterises the jazz club Fasching, where about fifty diners are enjoying their food on a Monday evening. Soul singer Graciela Chin A Loi will soon perform her first gig with her own material. The 27-year-old singer from Stockholm has music in her blood.

Her dad, Pancho Chin A Loi, plays bass and sings in many different genres such as gospel music, jazz and salsa. Each has been constant companions in her life.

The band ‘Elements‘ enters the stage a few minutes to eight. They start with the fast ‘On The Bottom Of The Ocean’ where Kristian Persson on trombone and Emmanuel Hailemariam on guitar are given space to shine in long solos. The band paints an atmospheric sound and sets a hypnotic mood. ‘Levels’ by Bilal comes to mind as the band intensifies their playing. After the ten minute long intro, the audience welcomes Graciela Chin A Loi up on stage. She wears black tights, high-heeled shoes and apricot coloured linen. Smiling she greets the audience and presents the song ‘Somethings Are Gonna Change’.

“So please rest assured that your worth is not depended on achievements, but it defines your great ability to reach them.” she sings.

It’s a song about human dignity. We are not defined by what we do, but that we are all human beings, all equal and nobody can take that away from us. That’s something we all need to be reminded of from time to time, especially in these times.

The night before the far-right populist and anti-immigration party Sweden Democrats, SD, received 13 percent of the votes in the Swedish parliamentary elections, to the shock of many including myself.

“Friends of Sweden, we are now the third largest party”, the party leader Jimmie Åkesson rejoiced in his speech on SD’s election night party.

Something woeful awakens in me as I reminisce about the election. The soul singer on stage serves as one of many examples of why SD is totally wrong.

Graciela Chin A Loi is channelling the spirit of political consciousness that characterised the seventies great soul heroes.

In her song, I hear echoes of Marvin Gaye’s falsetto cries for social justice. ‘Some Things Are Gonna Change’ culminates in an endless jam where Graciela and trombonist alternately trump each other in musical excellence. I feel elated and the weight I felt during the day because of the success of SD begins to ease.

Joel Lyssarides, the 22-year-old pianist with skills that signals a maturity far beyond his age, initiates the jazzy “Until We Part”. After just a few beats Graciela Chin A Loi stops the band with a laugh.

“I think we should take it from the top, it can start so much better”, she says.

Relaxed or unprofessional one might ask? I choose the former and Graciela to evoke some warm laughter in the audience. Graciela Chin A Loi moved casually and relaxed on stage, and it shows that she enjoys performing.

A highlight of the evening is the Kristian Persson-written ballad ‘Nothing Really Makes Me Happy’, which Graciela performs with the songwriter. They sing “Will the sun rise again? We just need to know; I guess the time will show” with strong empathy.

Graciela Chin A Loi is a brilliant singer. She’s a world class act in her best moments. What surprises everyone during the evening is her songwriting.

The melody takes unexpected turns, and you never know what’s behind the next corner. Its soul and jazz in a progressive mix, the groove is at the centre. She lets the musicians take centre stage, and although the solos are long, they never feel out of place.

As their last cut Elements and Graciela Chin A Loi play the brilliant ‘People Are People’. A Graciela and Gustav Orphée Noah-written humanistic declaration of war against the ugly face of racism. Maybe it’s extra strong on a night like this – the day after SD celebrated great triumphs. When Graciela Chin A Loi, who has roots in all four corners of the world, steps off the stage the applauds are also for another, higher meaning.

The crowds applaud is for multiculturalism, for human equality and for an inclusive view of the world.
Graciela Chin A Lois tools for change is her music.

Footnote: Nothing Really Makes Me Happy will be released as a single by Kristian Persson / Elements in a few weeks.
Tags: Christoffer HidingGraciela Chin A Loireviewsocial justice 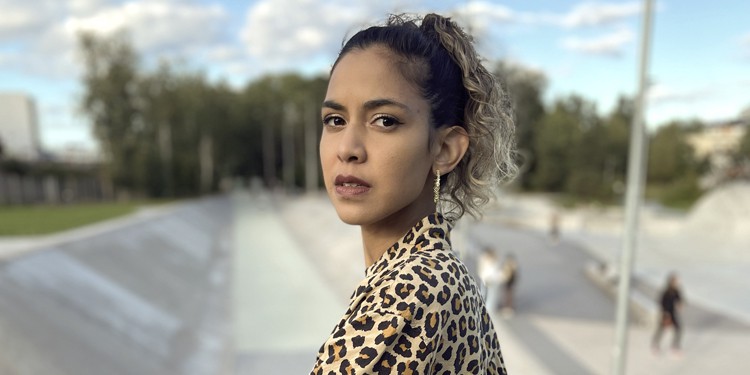