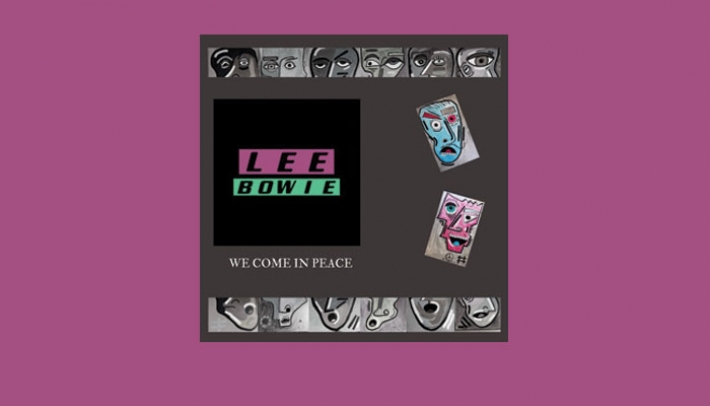 We Come in Peace – Lee Bowie

or The mysterious case of Lee Bowie.

Case File: We Come in Peace

Did aliens arrive in Sweden?

The identities of the male and female artists who form Lee Bowie are shrouded in mystery as both wear masks in all press photos and promotion material. Lee Bowies’ only identity card is their debut album ‘We come in Peace‘. The selection of tracks is described as ‘a fusion of futuristic electro-pop’, and yet, this collection found its way to us. After indulging in their music for a couple of hours, I understood why. The R&B flavours and hip hop lyrical style set this course into the borders of soulful Scandinavian music.

So just who is Lee Bowie?
The mystery is afoot!

Well, Watson, here’s what we know.

Speaking about the album, the duo said: “Conversation is, in our thoughts, the opposite of war. It’s attempting to bridge divides and see points and perspectives that you’ve previously been blind to. Every song is a question asked out of sheer curiosity and a will to discuss things that we don’t understand, and that seems to also cause confusion on a broader scale.

Nobody has the RIGHT answer, but we’re convinced that somewhere out there, there’s a solution that works better than what we currently have and we need only dare to look for it and be patient. “we come in peace” because we don’t bring a set of rules; instead we bring a set of questions and an open mind.”

From this, I could deduce these duos creations were also in pursuit of answers.

From the fiery guitar chords on the outset of the track – Money, it delivers a reggae-tinged R&B blended track, with the unknown female songstress igniting with a hip-hop styled vocal. AttaGurl would not pass any censors with its explicit lyrics however they’d be missing out because this is a fabulous joint to turn up!

Even without explicit text (Porcelain), the sexual undertones make this, also reggae-tinged single, a steamy affair. The mysterious females’ assured vocals captivate with lyrical clarity, and the production, though conceptual, is never indulgent or overly complex — the beat drops in all the right places. The rhythm on Glitter is delicious like a cinnamon bun!

The electric guitar chords on the cinematic/R&B single – Glue gives an insight into their rocking roots (this is Sweden after all) and its heard clearer in the track – Jesus. I have a good feeling both listen to a broad range of music. The arrangements and lyrics are, like all their tracks, fully accessible whether tongue-in-cheek or in with worded sentences of inspiration – ‘celebrate the bad times’. Could their parents be Bille Eilish and Axel Rose, with Timberland as the godfather?

The final track Killing – heads directly into pop waters, however ahead of those are songs, hard to define, ambitious and highly pleasurable.

Without being radical, this album manages to stand out. The duo successfully combine textures of different genres into a euphony of embroidered tracks. They answer yes, to the question if music continues to evolve into new exciting paths. Maybe the band did come from outer space to give us a clear glimpse into the future?

Lee Bowie is seriously worth investigating.